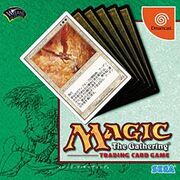 Magic: the Gathering is a video game for the Dreamcast. It was released exclusively in Japan on June 28, 2001.

The game takes place in the town of Magic Heart, and its surrounding areas of Murg, Camat Island, Lydar Forest, Yeluk, Tornell, and The Balance Tower, each representing a basic land that the opponent's decks will be based around. It includes cards from Sixth Edition, Alliances and Tempest.[1]

Graphically, the game prefigures Magic Duels. The interface uses a mix of Japanese and English text, and some gameplay events prompt English voiceovers.[2]

The game includes ten cards not found elsewhere, either digitally or in print.[3] Many of them use random effects that would be difficult to implement on printed cards.