Magic: the Gathering, also referred to as Shandalar, is a computer game written by MicroProse. It was first released in April 1997.[1] This Windows 95 version replaced the previously announced MS-DOS version.

Aside from random duels against the computer using customizable decks, the game features an enhanced campaign mode set on the plane of Shandalar, a deck builder, and a multimedia tutorial. 465 cards were included, taken almost exclusively from Fourth Edition, with a few extremely rare and famous cards from previous sets (Limited Edition and Arabian Nights) thrown in.

For other uses, see Astral. 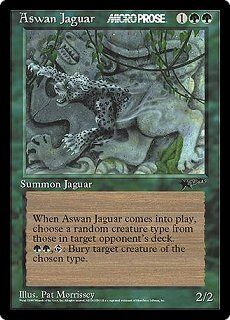 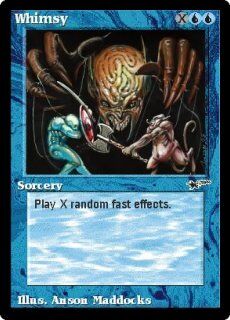 Part of the original Magic: The Gathering game is a "semi-expansion" of 12 cards, known as Astral. The Astral cards have their own set symbol (), and incorporate various random attributes that would be difficult or impossible to replicate in real life.[2] While most of these cards exist only within this game, the first 50,000 boxes published contained an oversized version of the card "Aswan Jaguar", which has the MicroProse logo printed between the name and cost.

Spells of the Ancients[edit | edit source]

In September 1997, an expansion set called Spells of the Ancients was released, which increased the card pool by 92 cards taken from Antiquities. Additionally, it added a sealed deck generator.

Duels of the Planeswalkers[edit | edit source]

In February 1998, the main game was rereleased in a special edition named Duels of the Planeswalkers. The card pool was increased by 385 cards, incorporating cards from Legends as well as filling in cards not supported in previous releases. Furthermore, it included an option named ManaLink to allow play against other players online.

In August 1999, Hasbro announced its plans to ship a new version of the game, called Gold Edition, in the fall.[3] It would have included play against AI, multiplayer either over LAN or via the Internet, further additional cards from Legends and The Dark, and new features such as sideboarding.