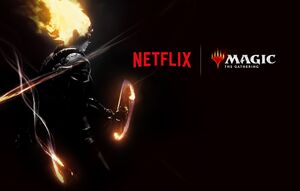 Magic: The Gathering is a planned animation series based on the TCG Magic: The Gathering, that was announced in June, 2019.[1] The series is to be released in 2021 on Netflix and is created by Wizards of the Coast, and Hasbro’s Allspark Animation.

As early as 2001, a mini-series for television was considered by Wizards of the Coast, and Mark Rosewater wrote a story treatment.[2] In 2008, the plans were shelved when an agreement was struck with Universal for a Magic: The Gathering movie. However, neither this movie, nor subsequent initiatives led to concrete products.

Joe and Anthony Russo (Avengers: Infinity War and Avengers: Endgame) will executive produce the series. The Russos will oversee the creation of an all new storyline and expand on the stories of the Planeswalkers.

Magic: The Gathering will feature creative talent from Spider-Man: Into the Spider-Verse, Batman: The Animated Series, Star Wars: The Clone Wars, Firefly, Agent Carter, Ultimate Spider-Man, and The Lego Movies.

Animation on the series will be done by Bardel Entertainment.

Mark Rosewater has repeatedly stated that Wizards of the Coast don't want a movie or TV show with people from Earth traveling to Magic’s worlds.[3]

According to the producers, the story, worlds and characters are going to be true to their preexisting spirit, but the TV Series is going to have its own continuity space similar to how other franchises have done that with adventures in a new medium.[4] In other words, the TV series will not be canon.[5]

In April 2020, it was reported that Netflix was working on a live-action project besides the animated miniseries.[6] The two projects won’t be related. Angelina Jolie was reportedly considered to play Liliana Vess.