Magic Origins comes with a clash pack which contains two ready-to-play decks, (one

).[1] These may be combined into a stronger deck. 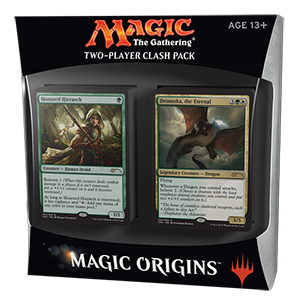 Armed is an aggressive white-green deck based around the renown mechanic.

1 Seeker of the Way

The alternate art foils in this deck are Honored Hierarch, Valorous Stance and Seeker of the Way.

Dangerous is a Midrange white/black/green deck based around outlast and bolster mechanics, the signature mechanics of the Abzan Houses.

1 Avatar of the Resolute

The rares in this deck are Dromoka, the Eternal, Anafenza, Kin-Tree Spirit, Avatar of the Resolute, Siege Rhino, Abzan Ascendancy and Citadel Siege.

The alternate art foils in this deck are Dromoka, the Eternal, Siege Rhino and Sandsteppe Citadel.

1 Avatar of the Resolute

1 Seeker of the Way