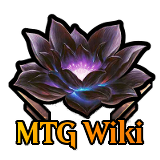 Dungeons & Dragons: Adventures in the Forgotten Realms is a Dungeons & Dragons crossover Magic: The Gathering set which replaces the core set of the 2021-2022 standard rotation. It is the 88th Magic expansion and releases on July 23, 2021.

The Forgotten Realms is a campaign setting for the D&D fantasy role-playing game. Commonly referred to by players and game designers alike as "The Realms", the planet Toril is shared by humans, dwarves, elves, goblins, orcs, and other peoples and creatures. Technologically, the world of the Forgotten Realms resembles the pre-industrial Earth of the 13th or 14th century. However, the presence of magic provides an additional element of power to societies. The cards tell the story of Drizzt Do'Urden and some of his friends battling Frost giants in the north of Faerûn.

The Forgotten Realms are not considered to be canonically part of Magic 's Multiverse. Some iconic D&D characters that have traveled the various D&D planes of existence are being featured as Planeswalker cards. However, this doesn't mean that these characters have a planeswalker's spark in the sense of in Magic 's lore.

Do you want to help build the wiki?
Start here or join our Discord!

Please read up on our Rules and Policies and if you find any infractions please notify the Admins.
MTG Wiki is a free, open-content encyclopaedia that anyone can edit. This site is not affiliated with or endorsed by Wizards of the Coast.
Retrieved from "https://mtg.fandom.com/wiki/Main_Page?oldid=408190"
Category: