Mangara of Corondor was a human mage on Dominaria known for his peaceful nature and diplomatic skills. He was protected by Eskil the White.[1] 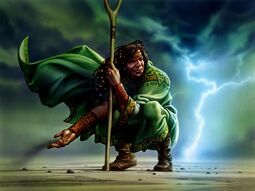 With his Quirion allies Mangara came to Jamuraa to research the events on Teferi's Isle. When he found nothing but barren rock, he joined the two other mages that had been attracted by the event, Kaervek and Jolrael, when they traveled back to the mainland of Zhalfir.

Mangara's brilliant diplomacy helped resolve the tensions between the nations of Zhalfir, Femeref and Suq'Ata, which earned him the respect of the people and soon the control of all three countries. Among other measures, he brought his elven allies to the Uktabi Jungle to achieve this peace. Ruling Zhalfir with an honest, pure hand, Mangara brought about a new age of equity, known as Mangara's Harmony. But a jealous Kaervek turned on Mangara and imprisoned him in an Amber Prison and thus started the Mirage War.

Mangara scryed Jamuraa while imprisoned and thus knew Kaervek's deeds and his whereabouts. When Asmira and Rashida Scalebane freed him, Mangara immediately took action. With the aid of his Quirion friends and the Mundungu of the Zhalfirin tomb-city of Aku, Mangara was able to turn the tide and trap Kaervek in the Prison. He left Jamuraa soon after.

Mangara was one of those individuals who were brought to post-apocalyptic Dominaria through the time rifts.

Like many other prerevisionist names, Mangara's is an anagram, coincidentally enough, of the word "anagram."[2]