Marit Lage was a powerful being comparable to a demi-god with a kraken-like figure who came to be imprisoned on Dominaria at some point before the Ice Age.[1]

The Argivian scholar Arkol thought Marit Lage was a planeswalker, but he was wrong: she is a being of immense power, able to move across the planes but not by the same means planeswalkers can. Little is known about her life, her fate, or even what exactly she was. It's implied that she wreaked havoc on Dominaria at some point ("lifetimes" before the Ice Age, or "500 years ago" in The Eternal Ice), and it's clear that she had a human following (Acolytes of Marit-Lage and Brine Shamans) even long after her disappearance. During the Ice Age, she was frozen in the heart of the Ronom Glacier.[2] It is unknown whether she survived and what happened to her or her body once the Ice Age ended.

Relationship to the Eldrazi[edit | edit source] 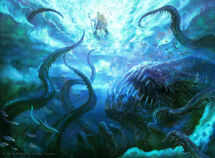 Marit Lage bears many similarities to the Eldrazi creatures that first appeared on Zendikar in the set of the same name. Both Marit Lage and the Eldrazi are Lovecraftian horrors, with the Kraken-like features that are the hallmark of the Cthulhu mythos. Like Cthulhu specifically, she slumbers in a large body of water while human worshippers wait for her return. The flavor text for the original printing of Wrath of Marit Lage, "Dread Marit Lage lies dreaming, not dead", is very similar to Lovecraft's famous line "In his house at R'lyeh, dead Cthulhu waits dreaming" (presented as "Ph'nglui mglw'nafh Cthulhu R'lyeh wgah'nagl fhtagn" in the original in-universe language of that mythos).[3][4]

In addition to commonalities derived from their shared source material, Marit Lage shares the Eldrazi's innate capacity to move between planes. However, several differences exist. Marit Lage is female, while the Eldrazi are genderless, though the Eldrazi titans are sometimes referred to using the gendered pronouns for their corresponding Zendikari deities.[5] Marit Lage is specifically associated with black mana and referred to as both a mage and a sorceress, while the Eldrazi are colorless and do not cast spells. Additionally, her physical form is her true body. The assorted Eldrazi titans are merely projections of extraplanar entities, and the lesser Eldrazi are extensions of the titans. Furthermore, unlike the Eldrazi and despite all of her destructive power, Marit Lage never engaged in the consumption, transformation, and restructuring of entire planes.

Since Marit Lage and the Eldrazi were created fifteen years apart, they may have no deeper relationship than as separate interpretations of the Cthulhu mythos by different Creative teams.