Masters 25 is a booster-based compilation set that was released on March 16, 2018.[2][3] It is designed to be drafted and celebrates twenty-five years of Magic: The Gathering.[4][5] 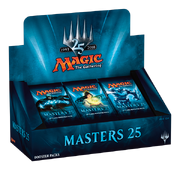 Masters 25 contains 249 cards (101 commons, 80 uncommons, 53 rares, 15 mythic rares) and includes randomly inserted premium versions of all cards. The product contains cards from across Magic 's entire history, a concept earlier seen in Eighth Edition. Cards from un-sets and the Reserved List are excluded.[6][7] The expansion symbol for this set is the planeswalker symbol with a 25 in front of it, slightly different from the symbol used for the 25th anniversary. Nearly every card in Masters 25 features a watermark, representing its original expansion symbol. This treatment is even used for cards first printed in Limited Edition (Alpha), using a Magic M as the watermark. Un-watermarkable cards like planeswalkers are excluded from this treatment.[8] The set features over 30 pieces of new Magic art and many pieces of new flavor text.[9][10]

Like Iconic Masters, the release of this set forms part of the celebration of Magic's 25th anniversary. Like for earlier Masters series sets, the MSRP of one booster was set to $9.99. Unlike Modern Masters or Eternal Masters, this product is not geared to any specific format.[11] Every booster box of Masters 25 contains 24 booster packs — each with fifteen randomly inserted game cards, including one premium card in every pack. The 16-card boosters (the sixteenth card is a marketing card) feature artwork from Jace, the Mind Sculptor, Azusa, Lost but Seeking and Sundering Titan.

Masters 25 will be available on Magic Online starting December 7 for $6.99 per pack. It will not be redeemable.

Masters 25 covers all of Magic's 25 years, with at least one card from all black bordered releases in those 25 years. Rather than focus on mechanics or archetypes as most Masters series products do, the set is focused on famous combos and iconic cards from the past to make the gameplay as high on nostalgia as possible.[12][13]

The table below organizes every card from Masters 25 according to the black border set in which they were originally printed. While each set got at least one reprint, some sets (and blocks) were clearly prioritized over others in card selection due to a variety of factors (limited concerns, raising availability for non-rotating formats, overall financial value).

The most represented sets/block are Onslaught block (with 20 reprints), Time Spiral block (with 14 reprints), then Alpha (with 12 reprints). Check the "N° of cards" column for the full detail.

Masters 25 has one mirrored pair. 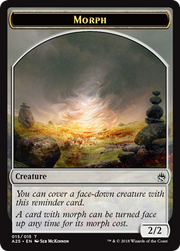 The set comes with fourteen tokens and one overlay card.[14]

After the disappointed reactions to Iconic Masters, Gavin Verhey had promised that Masters 25 would be Masters set that people had been waiting for.[18] But again, people were disappointed about the lack of several much needed, high profile, reprints. Verhey later acknowledged that some mistakes had been made in design.[19]