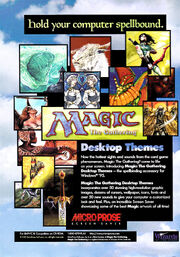 Magic: The Gathering Desktop Themes was an accessory for Windows 95. It included over 50 high-resolution graphic images, dozens of cursors, wall papers, icons, fonts, over 50 sounds and a screen saver. It immediately became a solid seller — and a sensitive topic between artists and WotC as a battle brewed over who owned the rights to all that Magic art.[1]

The computer company wrote the Magic computer game for Magic, which was released in April 1997 and expanded in September 1997.