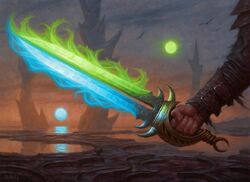 Sword of Body and Mind, by Chris Rahn.

At first, the swords were released across sets that featured Mirrodin and New Phyrexia and offered protection from enemy colors.[1] Swords featuring allied colors started being released with Modern Horizons.

Some swords have been reprinted in the Masters series, in Masterpiece Series, and even as judge promotional cards. While many swords have received different art, Chris Rahn has created a piece of art for each sword so far.