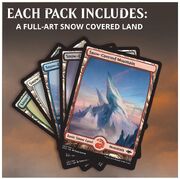 Modern Horizons contains 254 cards (5 snow-covered basic lands, 101 commons, 80 uncommons, 53 rares, 15 mythic rares[6]), and includes randomly inserted premium versions of all these cards. In addition, there is a Buy-a-Box card numbered #255/254. This set introduced new cards into Modern without them ever being legal in Standard. It contains 209 new cards and (excepting the snow basics[7]) only reprints which previously weren't legal in Modern.[8] For this, it was rigorously playtested by Play Design.[9] The Buy-a-Box card is also a new-to-Modern reprint. The powerful new card options, some with old mechanics, are mixed with flavorful updates for favorite characters.[10] The snow-covered basic lands appear in the land slot of Modern Horizons boosters.

Modern Horizons was originally dubbed as "Timespiral / Planar Chaos 2" in concept due to set complexity.[11] Mark Rosewater has called it a "love letter" to the Time Spiral block.[11] It isn't an entry level set because of its many returning mechanics. There was no story support for the set.[12]

Modern Horizons was sold in slightly larger-than-usual 17-card boosters (one card being a double-faced token, and one being an art card[13]), and in a Draft Pack. The boosters feature horizontal artwork from Ayula, Queen Among Bears, Serra the Benevolent and Urza, Lord High Artificer.[14] The set was printed for as long as demand held.[15] It was released on Magic Online on June 13, with a booster price of $6.99 (regular booster packs cost $3.99). It was not featured on MTG Arena.[16]

The sixteenth card in the boosters is a double-faced token creature card or an emblem:[18][19] One out of every four tokens is foil (but not double-sided).[20]

Back side of the art card

The seventeenth card in the boosters is an art card with horizontal full art from one of the regular cards in the set.[18] The card back is mostly blank, with some collector's info. There are 54 different art cards.[19]

There are no new mechanics in Modern Horizons.[21] Instead, the set features more than forty non-evergreen returning mechanics.[22] R&D decided that the set could use any mechanic already in Modern up to Dragons of Tarkir.[23]

A major mechanic is changeling, used to make a cohesive set (like it was used in Lorwyn previously).[5][24] Snow is also a major mechanic.[24]

Like in Future Sight before, the set features some "Mix-and-Match" cards, combining two different non-evergreen keywords on the same card: Feaster of Fools, Hogaak, Arisen Necropolis and Throes of Chaos.[26]

Modern Horizons has nine cycles, two of which are double cycles.

The Mirran swords mega-mega cycle gets its first allied colored additions. Though, the cycle is not complete with Modern Horizons.[26][32]

Modern Horizons was a set that completely shifted the meta of eternal formats especially in modern and slightly in legacy. This included the banning of both older and newer cards which led to the collapse of several older decks that were part of the main modern meta.