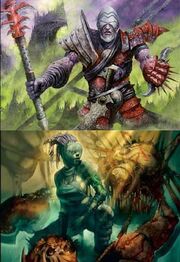 The Moriok are a human ethnic group who live in the Mephidross swamps of Mirrodin.[1] Most Moriok dwell in Ish Sah, but some live as scavengers in the muck of the Dross in search of the treasures hidden in its midst. The evil magic of the Necrogen mists affects their brains, exacerbating their natural human tendencies toward hate, aggression, and greed. The Moriok revere the black moon of Mirrodin, calling it the Whisperer, and believe that it grants power to those who can listen.

Moriok tend to have pale, unhealthy-looking complexions due to the hostile environment of the Dross, and some even have patches of skin and flesh missing, giving them a cadaverous appearance. Their hair is dark and stringy. Like all lifeforms on Mirrodin, pieces of metal (presumably lead) poke through their skin in many places, though not as much as the Vulshok or Auriok. The most alarming feature of the Moriok is the black metal plate that grows across their eyes, making them blind. Moriok dress is usually dark and somber.

After the Vanishing, the Moriok found themselves targeted by Nim aggression. The Nim Onslaught decimated the Moriok so that they became an easy target for the new Phyrexians. Once Mirrodin became New Phyrexia, the Moriok were the first human race to become nearly-extinct, most of the only individuals remaining being the compleated ones, which were rendered slaves, without eyes or free will. A tiny minority have joined the Mirran Resistance.

Tribes of the Moriok[edit | edit source]

To survive in the treacherous mephidross, the moriok have banded together to form small clans.