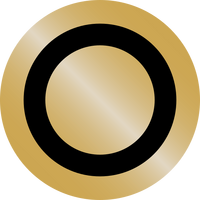 Multicolored (also "multicolor", "multi-colored", "multi-color"; as opposed to "monocolored", "mono-colored" "single-colored") cards were introduced in the Legends set, and use a gold frame to distinguish them. For this reason, they also can be referred to as "gold" cards.[1][2][3][4][5][6][7]

Multicolored cards require mana from two or more different colors to be played. Multicolored cards tend to combine the philosophy and mechanics of all the colors used in the spell's cost. For examples Quicksilver Dagger and Niv-Mizzet, the Firemind, which combine blue's ability to draw cards with red's ability to deal (direct) damage ("pinging").

Two-color hybrid cards have costs that can be paid with either of the card's colors (as opposed to both) were introduced in Ravnica. They are considered to be of both colors. This means that, for example, if a card has a mana cost of

, it has a converted mana cost of 1, but the card is considered both a red card and a green card. Hybrid revolves around the mechanics and philosophies that the two colors have in common. The cards are distinguished by a gradient frame with those two colors.

Multicolored cards tend to be more powerful compared to single-color and hybrid cards, due to the restriction of requiring the player to use all the colors in the mana cost.

Alara Reborn was the first, and so far only, Magic set in which all of its cards are multicolored.

Multicolored
An object with two or more colors is multicolored. Multicolored is not a color. See rule 105, “Colors,” and rule 202, “Mana Cost and Color.”

Using color pairs to structure the Limited environment does a lot for development to create a better product.[8][9]

White-Blue is slow and steady. Typical white-blue decks stall the game and let the users cast their major spells in the late game.

Blue-black is related to secrets and forbidden knowledge. Blue's emphasis on information and black's solitary nature combine to create a very secretive color pair. The opponents of Blue-Black decks often realize that they are going to lose when it is too late.

Black's anti-sociality and Red's hedonism combine to create a very sadistic and sociopathic color pair. Black-red decks typically prefer overwhelming opponents at all cost, often at the expense of their own creatures and even their users' life total.

Red-Green is very unthinking, considering the fact that it has red's impulsiveness and green's preference for instinct over the mind. Red-Green decks are typically highly aggressive and attempt to overwhelm their opponents with pure strength.

Green-White detests black's individualistic attitude and is the color pair of group and unity. Green-White thrives in being in groups.

White-Black as a color-pair can represent corruption or dishonesty under the clever veil of mercy and/or kindness. It may also represent the balance of good and evil, where the world is seen as a grey area in times of war or strife. As a mechanic, White-black is about gradually killing one's enemies, with white slowing the game down and black destroying the opponent's creatures and draining their life totals.

After combining Blue's desire for progress and red's impulsiveness, Blue-Red is a color pair that focuses on innovation.

Black-Green embodies the cycle of life and death and thrives on exploiting the cycle. Black-Green capitalizes on creatures that slowly grow over time or those that have special effects when they die.

Red-White represents enforcement of justice, as a mixture of red's readiness to take action and white's insistence on honor.

Green-Blue is the color pair of progress. Both green and blue enjoy seeing the world evolve, although the former prefers reaching it by natural selection while the latter prefers artificial means.

Several sets have had major three-color themes, most notably in the Alara and Tarkir blocks. The Alara block focused on the shards in Shards of Alara, but had a strong five-color theme in Conflux and focused more on two-color gold cards in Alara Reborn with its all-gold gimmick. The Khans of Tarkir block only focuses on wedges in its namesake set Khans of Tarkir.[10] As such, three-colored cards can show up every now and again in other sets.[11] Starting with the Tarkir block, the new default for showing three color costs is to place a pair's mutual enemy in the middle.[12]

Shards are sets of three colors (a color and its two allies) that form an arc, or an obtuse triangle. Originally called an "arc," the term "shard" was established in the 2008 block Shards of Alara after its major locations:[13]

Within Alara, the color that is allied to both of the other colors was considered the "primary" color of the shard by the design team; for example, Bant's primary color was White.

Wedges are sets of three colors (a color and its two enemies) that form a wedge shape, or an acute triangle.[14][15][16] The term "wedge" has existed since antiquity, but were individually named in the 2014 set Khans of Tarkir after its major factions:[17]

Within Tarkir, the color that is left-most of the allied colors, when looking from the base of the triangle to the tip, was considered the "primary" color of the wedge by the design team; for example, the primary color of Abzan was White. Their "center" color was dropped after all were dominated by elder dragons in Dragons of Tarkir; Abzan descendants lost their ties to Black, Jeskai to Red, etc.

While not as large a focus, wedges also saw heavy use in the set Ikoria: Lair of Behemoths.

The first card with five colors (

) was 1996 World Champion, the first one that was legal for sanctioned play was Sliver Queen.[21]