Mythic Championship London 2019, or Mythic Championship II, took place on April 26–28, 2019, in London, United Kingdom. 513 players participated, putting all three of the largest tournaments in the same Pro Tour season. As a twist, the Draft set of the tournament, War of the Spark, was undergoing prerelease weekend the same weekend MC London, making it the first Prerelease Pro Tour since Pro Tour Atlanta 1996, with Mirage. The set was not legal for Modern. 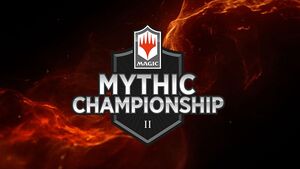 In addition to being the first prerelease Mythic Championship for more than 20 years, a new mulligan rule was undergoing a stress test. The London Mulligan, put simply, is that "for the Nth mulligan you take, you draw 7 and put N cards back". While it had very favorable results in Standard and Limited, the main concern was the ability for powerful combo decks to find their combo in stronger formats such as Modern and Legacy. As such, MC London was used as a staging ground to determine how powerful it would be in such a format, especially one without the general catch-all of Force of Will. WotC would take note of all the matches in the feature matches and their mulligan decisions and note where the mulligan favors. Most players were interested in how this would turn out, many expecting dedicated combo decks to dominate, but others rebutting that the hate cards are easier to find and any appropriate disruption gets more powerful.

Additionally, the decision was made for decklists to be semi-open after round 5, with main-deck known and sideboard cards shown but unnumbered. This allowed for more informed mulligan decisions, especially for reactive decks. While this was moderately well-received, the quirk that only round 4 was being played blind was seen as a bizarre exclusion.

The arrival of Arclight Phoenix and departure of Krark-Clan Ironworks made for a Faithless Looting-heavy metagame, but the biggest impact was likely the fact that the mulligan rules will have changed. Urzatron was an expected big winner from this change, alongside other linear decks such as Ad Nauseum combo and Amulet Titan, and high-density aggro decks like Spirits and Burn were expected to drop as their better mulligans don't improve significantly. Humans, GBx Midrange, UW Control, and Death's Shadows decks were expected to advance in slight fashions with known decklists and the ability to chokepoint the combo decks with a specific interaction. The newest deck in the format, a Whir of Invention prison deck, had started picking up steam before London with the artifact hate against KCI on the downswing.

The first War of the Spark draft followed Paulo Vitor Damo da Rosa live, while Luis Salvatto was recorded. Paulo drafted a heavy Proliferate GW deck which was light on interaction and went 2–1, losing to Joe Soh in the final, whereas Salvatto had a GB deck that had powerful bombs but was a little top-heavy and suffered an 0–3 start to the draft. Notably, the freshness of the format and its inherent speed resulted in far more draws in the draft portion than normal, which would result in a lowered bar for the Top 8 down the line, despite the high number of players.

The Modern metagame was not heavily dominated by any deck, with Tron coming in at 14.6%, with Izzet Phoenix and Humans the only other decks above 10% representation. Despite the known midrange killer of Tron looming over the field, many of the popular decks were not heavily biased towards linear aggro or combo, with Amulet Titan and Humans being the fastest in the top ten decks. In the final rounds, a big name from a former generation, Olivier Ruel piloting Esper Control, posted the perfect 8–0 record, and just behind him at 7-0-1 was David Fernando Gonzales of Argentina.

The top eight players after day one:

The second draft followed Hall of Famers Yuuya Watanabe and Olivier Ruel, with the decks they drafted living on opposing ends of the spectrum - Watanabe finding himself a Sultai deck with fixing for Niv-Mizzet Reborn, while Ruel assembled an RG beatdown with four Kronch Wranglers. The defensive power of the format stifled much of Ruel's deck and he went 0–3, while Watanabe scraped his third win with no turns left on the clock.

Thien Nguyen, piloting Scapeshift, went undefeated on day 2 and picked up his Top 8 position early, and would draw with Brian Braun-Duin after the latter's victory over Yuki Matsumoto in round 15. Also in round 15, Javier Dominguez defeated Seth Manfield and drew with Chris Kvartek, who defeated Mark Jacobson; Alexander Hayne defeated Love Rask, and drew with Watanabe, who had picked up his 12th win against Jacobson in round 14. Eventual champion Eli Loveman went on a 10 match hot-streak, picking up win 13 in the final round against Joao Andrada; and the last spot would have been taken by Adrian Zhu, who won over Sergio Garcia Gonzalez. A shock announcement occurred just prior to the Top 8, however, where judges determined that Watanabe's sleeves were marked suspiciously enough to warrant a DQ, leaving an open slot for the top 12-4 player, Matt Sperling.

Yuuya Watanabe was disqualified after Round 16 for having marked cards.[1]