Nahiri, called The Lithomancer and The Harbinger, is a talented Kor stoneforger, lithomancer, and planeswalker from Zendikar.

Nahiri is white-skinned and white-haired. Being a lithomancer, she has special power over stones. She used to be one of The Three — a group of planeswalkers that included Sorin Markov and Ugin — that decided to rid the Multiverse of the threat from the terrible Eldrazi. The duty-bound took it upon herself to keep the Eldrazi bound to her plane. She believed strongly in keeping one's word, becoming enraged the moment she realized Sorin had broken his own, going as far as to seek him out and confront him for his lie. She strongly believed in an eye for an eye, personally bringing doom to Sorin's homeworld in retaliation for him not helping, for she had been left to reseal the Eldrazi on her own. This led to a rather brutal, and somewhat blinding, feud breaking out between the two. This quest for revenge allowed her to tap into red mana.

Nahiri is primarily white-aligned, but secondary in red mana.

The Three against the Eldrazi[edit | edit source] 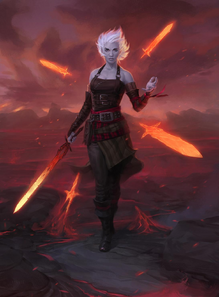 Sorin and Nahiri first met when the young Kor's planeswalker spark first ignited, and they forged an unlikely friendship. Viewing her almost as a daughter, Sorin taught Nahiri about the Multiverse and introduced her to many new planes. Together, they discovered the Eldrazi, witnessing Ulamog's destruction of a long-forgotten plane. They met Ugin soon after, and the three Planeswalkers concocted a plan that bound the Eldrazi in Zendikar for millennia.

The Three decided to force the Eldrazi into physical form and trap them on a plane, sacrificing that plane for the well-being of the Multiverse.[1] They searched for a plane with lush ecosystems and uniquely dynamic mana—a powerful lure for the Eldrazi's insatiable hunger. Wanting to start their work immediately, the three decided upon Zendikar. Sorin Markov lured the Eldrazi to the plane, directing their hunger to that unique mana, Ugin used his invisible breath to combat the Eldrazi and his colorless magic to bind them to the plane, and Nahiri constructed a massive network of stone hedrons, whose power would form the bars of a planewide prison, forever preventing the Eldrazi from leaving. Ugin arranged the hedrons to direct leylines of energy, which were not to be disrupted.

The planeswalkers concentrated the power of their imprisonment spell in a secret location deep inside Zendikar's mountains of Akoum: a subterranean chamber called the Eye of Ugin. To make sure that the imprisonment would not be broken, the three planeswalkers sealed the chamber with a mystical lock: the Eye of Ugin could only be reactivated by the presence of three planeswalker's sparks — and the colorless, invisible Ghostfire breath of Ugin, the spirit dragon himself.

The planeswalkers' trap worked. Emrakul, Ulamog, and Kozilek manifested in physical form on Zendikar, became confined by the magic of the network of hedrons, and thanks to the magic of the imprisonment spell, sank into harmless dormancy. Their mission complete, The Three disbanded. Sorin and Ugin left the plane.

Nahiri stayed and lived happily among her people for a long time. The wild mana of Zendikar lured other beings to the plane as well, and Nahiri took it upon herself to protect Zendikar from those who would cause it harm. Of those, the most infamous was the interplanar conqueror Ob Nixilis, but before he could do much damage, Nahiri intervened and bound his power with that of a hedron.[2] She took on pupils and taught them to maintain the hedron network.

Centuries later she became tired of living and withdrew in a meditational slumber. The centuries passed and her teachings about the Eldrazi became garbled; Talib (Kozilek), Kamsa (Emrakul), and Mangeni (Ulamog) became the revered gods of the Kor. Nahiri was worshipped as the "prophet of Talib", who taught the Kor the arts of lithomancy.[3] When vampires (which hadn't been seen on the plane in the earlier days) built a shrine on the nexus of the hedron network, the prison of the Eldrazi became unstable, and the brood lineages spilled over the plane again. Nahiri awoke and called for help to Sorin and Ugin but they didn't respond. She succeeded on her own at restoring the prison.[4] Confused why Sorin hadn't shown up when she called for him, she decided to find him and planeswalked away from Zendikar.

Sorin imprisoning Nahiri in the Helvault

When Nahiri arrived at Innistrad, Sorin explained that her signal for help had been likely absorbed by the Helvault. Discontent with the truth, Nahiri guilted Sorin for his actions. Offended, Sorin angrily reminded her of who raised her as a planeswalker and advised her to go pester Ugin instead. Nahiri saw this as a betrayal of their bond and chose to physically threaten Sorin. This resulted in Avacyn's intervention, who sensed the threat that Nahiri posed to Innistrad. The two fought until Sorin ended the battle by imprisoning Nahiri in the Helvault. During her long stay within the Helvault, Nahiri encountered Avacyn after the archangel had sealed herself into the vault to contain an especially powerful demon.[5]

Six thousand years after they were initially imprisoned[6] the Eldrazi broke free, enabled by the meddling of several planeswalkers. This time, Sorin reacted and tried to reassemble The Three. But now, he was unable to free Nahiri without destroying the Helvault. He found Ugin dead on original Tarkir,[7] but alive in the new timeline.[8] Ugin instructed Sorin to find Nahiri.

When the Helvault broke, Nahiri fled back to Zendikar, only to find the Eldrazi unleashed, continents laid to waste, and her allies seemingly having forsaken her. Enraged, she swore vengeance against Sorin, vowing to make Innistrad bleed in the same way Zendikar had suffered.[9] She attacked Markov Manor, destroying it with lithomancy and imprisoning its vampires in a state of perpetual agony within its walls.[10] While active on Innistrad, people turned to worship of her, some ironically believing her to be an ancient vampire.[11] She created cryptoliths across Innistrad, using them to channel Innistrad's leyline energy to summon Emrakul to lay waste to Innistrad as the Eldrazi had laid waste to Zendikar before it.[12] As the focal point for summoning, she built the Drownyard Temple with help from Gisa's ghouls.[13] After the maddened Avacyn was killed by Sorin, Emrakul arrived and began corrupting Innistrad and its citizens. Thinking the plane lost, Sorin called for Olivia Voldaren to summon her vampire army and attack Nahiri.[14] The Lithomancer waited for them at the ruins of Markov Manor with her own army of cultists and Eldrazi abominations. In the end, Nahiri was wounded severely but managed to encase Sorin in stone. After this victory, she planeswalked away. 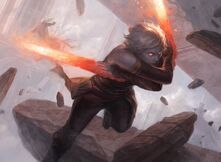 Nahiri was lured to Ravnica by the Interplanar Beacon, and immediately became trapped there due to Bolas' use of the Immortal Sun. During the invasion, the trapped planeswalkers (including Nahiri) got together with Ravnican leaders to strategize.

When Sorin arrived on Ravnica, he immediately went after Nahiri, and not even a threat to the entire Multiverse could persuade the two of them to put aside their feud. Ignoring the battle that raged around them, the two planeswalkers fought each other in single combat.[15][16]

However, they later came to a temporary truce, joining forces against the Eternals of Bolas' Dreadhorde. They were among the few planeswalkers who chose to remain on Ravnica after Chandra disabled the Immortal Sun, helping the Gatewatch in their fight against Bolas.[17][18]

It is unknown what happened to Sorin and Nahiri after that, although it has been confirmed that they both survived, and it can be assumed that they'll resume their feud.[19]

Search for the lithoform core

After returning to Zendikar, Nahiri heard of the renown of the Sea Gate Expeditionary House. She decided to help fund it,[20] having plans to acquire artifacts to stop the Roil that had originated as a consequence of her own actions.[21] This eventually led to her search for the lithoform core. 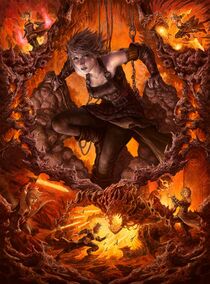 Heir of the Ancients.

Initially, she asked for Nissa's assistance in retrieving the core tile key of the Skyclave at Akoum. However, when she tried out its restoring power, its effects also killed an elemental summoned by Nissa. Realizing that restoring the geological stability of the time of the Kor Empire would destroy the plants and animals of current day Zendikar, Nissa turned against Nahiri.[22] As the key and inscriptions of Akoum pointed her to Murasa, Nahiri realized she could not visit the Murasa Skyclave alone and hope to survive. So she visited Kesenya at the Sea Gate Expeditionary House to hire help.[23]

She hired Akiri, Zareth San, Kaza, and Orah to accompany her to Murasa.[24][23] When they finally found the core in the Murasa skyclave, the remaining party-members were set upon by elementals.[25] Nahiri used the artifact to defend herself, but killed Zareth in the process.[26] Realizing the danger of the core, Akiri threatened to drop the artifact over the edge of the floating ruin. With her lithomancy, Nahiri used a hedron to paralyze Akiri, took back the artifact, and then pushed Akiri over the edge. While climbing up to the skyclave on a thorn ladder, Jace and Nissa witnessed Akiri falling down, and Nissa managed to save the Kor warrior.[27] Returning to the ground, they saw Nahiri leaving. Jace determined that the lithomancer was going to the Singing City, and Nissa immediately left to follow. Akiri was distrustful of the mythical "walkers" but decided to guide Jace to the Singing City anyway.

Deep in the city, Jace found Nahiri, but both were overwhelmed by the city's unsettlingly haunting music.[27] After Jace managed to save them by blocking out all sounds with a spell, they came to an uneasy understanding. Nahiri explained that the old city had a magical focal point from where she could channel the core's energy all over Zendikar through the leylines. Jace promised to not hinder her in her endeavor to save Zendikar, if she promised not to use the core until they had studied its mechanism in more detail. He knew that if he was ever going to unlock the mysteries of the core, he was going to have to understand how it was activated. If it was going to be a useful weapon in the battles to come, its mysterious power had to be quantified first.

Arriving at the focal point, they found that Nissa had reached it earlier and had destroyed it with help from Ashaya and her other elementals. Nissa felt betrayed, and Jace was unable to prevent an all-out battle.[27] Nissa and her Elementals attacked both Jace and Nahiri.[28] Their force was so overwhelming that the two planeswalkers had to retreat back into the Singing City. Barricading the entrance, Nahiri began to collect power from the stones. When Jace tried to persuade her to flee to Ravnica with him, she refused. When she tried to remove him from the equation, Jace turned the tables on her and took control of her mind. Taking the lithoform core from Nahiri, he tried to find Nissa to tell her that he would take it to Ravnica to study it. But an elemental immediately snatched it from him and gave it to Nissa.

After Nahiri regained control of her mind, she found that Nissa had used the power of the Lithoform Core to heal damage done by the Eldrazi and restore Zendikar's wild nature. The core was now dull and lifeless. Realizing that she had lost the fight, Nahiri planeswalked away, swearing revenge on Jace for his meddling.[28]