Niambi is a middle-aged human healer of Zhalfirin descent from Dominaria.

Niambi is the daughter of the planeswalker Teferi and his wife Subira. She was born about a decade after the Mending, and grew up in Femeref, formerly a province of Teferi's lost homeland of Zhalfir. Now a wise woman with lovely features and strands of gray threaded through her long braids, she is an accomplished healer and cleric of the sun-worshipping Femeref faith.[1][2] Her keen mind helped keep the Femeref together, which allowed for deeper understanding of their lost traditions and homeland.[3] 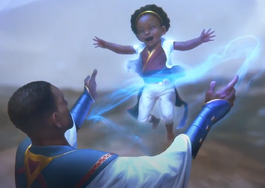 Young Niambi with her father Teferi

Of the many wayward souls she has tended, Niambi considered her father her first and most important charge.[4] A brilliant mind in her own right, she helped Teferi solve the many puzzles that the planeswalker Urza had left behind.