Nightmare is a creature type used for cards that depict terrifying monsters or evil spirits created by the unconscious mind. Nightmares occur in all colors.

The first Nightmare card was the equally named Nightmare in Alpha. This is a powerful, black flying horse that draws its power from the swamps.

Dementia casters like Chainer, Dementia Master and other members of the Cabal on Otaria have the unique ability to summon horrors from their personal "dementia space", a place populated with the caster's greatest fears and all beings they have killed. These so-called Nightmare Horrors appear also in blue and red.

On Ikoria nightmares are associated with Indatha and are one of the world's dominant clades. They are physical manifestations of humanity's fears and negative thoughts. Many either have too many eyes or none.[1] The first White Nightmares hailed from Ikoria.

The nightmares of Innistrad are twofold. One variant has little in common with the equines encountered on other planes. Instead, they manifest as spirit-like entities that torment sleepers (Persistent Nightmare). Others resemble classical nightmares and are closely tied to the demons of Ashmouth. (Stallion of Ashmouth)

Ashiok is a planeswalker from an unknown plane who discovered not only a great skill at culling the nightmares from others but also the ability to make them manifest in reality (Ashiok, Nightmare Weaver). Ashiok enjoys watching those who see themselves as untouchable and superior reduced to screaming and blubbering. Because all sentient beings feel fear, Ashiok believes in its power as the great equalizer.

The Nightmares on Ravnica are aligned with the Rakdos. They resemble an eight-legged, two-headed horse with fleshless heads that are carnivorous. (Carnival Hellsteed) There are also a Nightmare Sphinx and a Nightmare Demon associated with the Dimir. Ashiok's presence during the War of the Spark also generated some different form of Nightmares (Ashiok's Skulker).

As a consequence of the actions of Ashiok, Nightmares manifested in reality on Theros.[2] Some native Nightmares reside in the Underworld (Devourer of Memories, Underworld Charger). 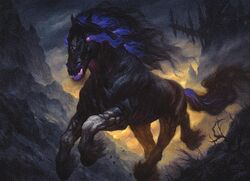 Many Nightmares are mares and therefore have the Horse subtype.

The original Nightmare was depicted as a mare. These horse with fiery manes arise from the swamps. As the poisoned land spreads, so does the Nightmares' rage and terrifying strength.

These Nightmares can be found across the multiverse, noticeably on Dominaria, Ravnica, Innistrad and Theros.

Whenever one of the Nightmare creatures, as featured in Torment, comes into play, another card (of a type specified in the Horror's rules text) in play or in hand is removed. When the creature leaves play, the card it "replaced" is returned to play. Some nightmares make an opponent gain and lose life respectively, instead.

Each of the blue Nightmares of Judgement requires the loss of a particular resource, usually permanents, excluding the rare ones, which take a turn or your hand, but return them on leaving the field. There are two vertical cycles in this category. —Wormfang Drake and Wormfang Newt in common, Wormfang Turtle and Wormfang Crab in uncommon and Wormfang Behemoth and Wormfang Manta in rare.

The Nightmare mechanic is currently moved to white.[4]