Nylea is the God of the Hunt on Theros.

Nylea is associated with the hunt, the seasons, and the forests. Her reign over the hunt extends on predation and hunger, while with her rule over the seasons, she is also a patron of metamorphosis and rebirth. At the center of her grove, there is a chrysalis, in which Nylea usually sleeps to receive strength and peace.

The God of the Hunt is usually aloof and thoughtful, but she is playful and joyful with her loyal companions. However, she has a feral, animalistic side and bears the responsibility of keeping the forest a safe haven for animals, preventing the spread of humans into her domain, and letting the natural world have free rein. Nylea is quick to anger and vengeance if something threatens her realm. She has complete dominance on the seasons, that she can change at her whim and delay if angered.

She is allied with Purphoros and permits him to unleash fires on the forest in order to grow new life or to keep humans away when they are encroaching too far into the wilds. However, she has a tumultuous relationship with Karametra, the God of the Harvests. Karametra is infuriated by Nylea's interference in the seasons. In turn, Nylea is disgusted by agriculture, which she sees as an aberration from the natural cycle of the world.

Nylea dislikes the construction of temples and cities in general. For this reason, she has no temples, buildings, or holy sites, save for trees surrounded by clouds of butterflies. When a similar tree is spotted, people know that Nylea is near. Most of her human followers are loners and outcasts. Nymphs of all kinds pay homage to her, as do sentient humanoids such as satyrs, centaurs, and many citizens of Setessa. Some city dwellers come into the forest to honor her, especially to pray that the seasons will change in a timely manner. Nylea hates sacrifices and is notoriously hard to please: worshippers could as easily anger her as win her blessing. One thing she likes is acts of kindness and protection of creatures both domesticated and wild. 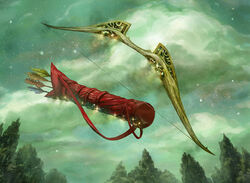 Nylea is the best archer on the plane, and as such wields a short bow called Ephixis. It is said that an arrow from Nylea's bow never fails to find its mark.[1] The nymph Theophila, Nylea's companion, conjures illusions for target practice, such as fireflies or minuscule silkworms. Nylea permits predation, but she hates hunting for sport: she personally kills poachers in the Nistos Forest who don't ask for her blessing to hunt her animals. Nylea watches over all the creatures of the forests, except snakes which, thanks to the blessing of Pharika, can take care of themselves.[2]

The character of Nylea is inspired by Artemis, the Greek goddess of the hunt, forests, and archery.