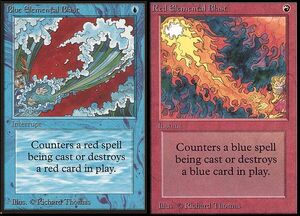 The Elemental Blasts, an early mirrored pair from Alpha.

Pairs, in Magic: The Gathering, are any two cards that are more often than not featured in the same set and share a number of characteristics, such as card names, mana costs, rarities, card types (and, if applicable, creature type and power/toughness), and abilities or effects. Matched pairs or mirrored pairs are two specific kinds of pairs. Sometimes cards that are connected by a theme, especially in art or flavor text, are called a pair without sharing gameplay characteristics.

A matched pair is a pair of cards that are of the same color, and that have abilities referring to different enemy colors, or to different allied colors. Less commonly, the first card may refer to two other colors while the second refers to the other two remaining colors. Examples of matched pairs include Disciple of Grace and Disciple of Law as well as Withering Gaze and Baleful Stare.[1]

"Matched pair" is sometimes used more broadly to refer to any kind of paired or related cards, such as cards with similar effects that contrast in ways other than color, or to mirrored pairs.[2][3][4]

R&D calls mirrored cards "reflections". Nowadays they appear at a much lower rate than in early Magic.[8]

A meld pair is a pair of meld cards which can meld into a single creature. Since two cards of a meld pair do not need to share any characteristics, they are not pairs in the traditional sense.