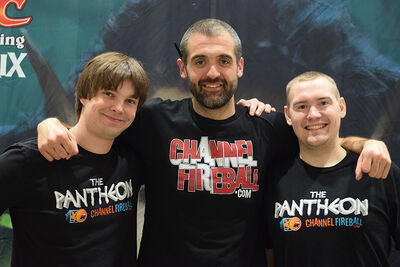 Peach Garden Oath (PGO) is a three-person team that consists of Reid Duke, William Jensen, and Owen Turtenwald. While being members of the larger group known as The Pantheon in preparation for Pro Tour events, PGO frequently play together at Team Limited events, where they have put up several strong finishes since the team's inception in 2013, including wins at Grand Prix Portland 2014 and at Grand Prix Cleveland 2017. Individually, the three team members have all often been considered to be among the best players in the world; in the 2013–14 Pro Tour Season, they finished 2nd, 3rd, and 4th in the Player of the Year race.[1] Since the formation of the team, each of its members has reached the final of the World Championship: Duke in 2013, Turtenwald in 2015, and Jensen in 2017, with Jensen winning and becoming the 2017 World Champion. In 2018, PGO made up half the team that won the 2017–18 Pro Tour Team Series, Ultimate Guard.