Endless March is a theme deck from Planar Chaos.

{{cquote|For the creatures in the Endless March deck, the battle never ends—and they wouldn't have it any other way. This deck revolves around the interaction of vanishing and “rescue.” It's an ideal match: When a vanishing creature gets low on time counters, play a rescue creature and return it to your hand. You can replay it fully restocked with time counters!

Your rescue creatures do more than return your Calciderms to your hand. If you rescue Mogg War Marshal, you'll get another Goblin token when you replay it. If you rescue Icatian Javelineers, it'll come back with a fresh javelin counter. A rescue creature with flash can save a creature after combat damage has been assigned, or after it's been targeted by a spell that will destroy it. 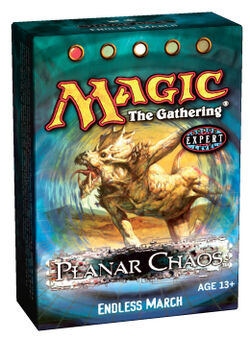 The 2 rares in this deck are Dust Elemental and Fatal Frenzy.

The timeshifted cards in this deck (from Time Spiral) are Avalanche Riders, Icatian Javelineers, and Soltari Priest.

The timeshifted cards in this deck (from Planar Chaos) are Brute Force, Calciderm, Sunlance.

Ixidor's Legacy is a theme deck from Planar Chaos.

Shapeshifting is this deck's specialty. Your face-down creatures do it. Your Shapeshifters do it. Cards like Unstable Mutation or Shaper Parasite do it. But the real fun is when you shift the shape of your opponent's creatures! Shaper Parasite can drop a small creature's toughness to 0, spelling its immediate doom. Even better, Serendib Sorcerer and Merfolk Thaumaturgist can team up to turn any creature into a not-long-for-this-world 2/0.

After you've dealt with your opponent's threats, it's time to finish the game with some threats of your own. Tidewalker isn't very stable, but it can be gigantic. How big Aeon Chronicler is depends on your hand size, which means it can also be huge—and if it's getting too small, you can play Ovinomancer or turn Fathom Seer face up to put a bunch of cards in your hand. As Ixidor's heir, you'll always have another trick up your sleeve! 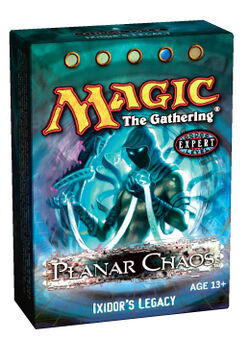 The 2 rares in this deck are Aeon Chronicler and Serendib Sorcerer.

The timeshifted cards in this deck (from Time Spiral) are Desert, Ovinomancer, Unstable Mutation, and Willbender.

Rituals of Rebirth is a theme deck from Planar Chaos.

Early in the game, drop giant creature cards into your graveyard with cards like Icatian Crier, Fa’adiyah Seer, and Greenseeker. Then play Resurrection or Dread Return to put a gargantuan attacker from your graveyard directly into play. Teneb, the Harvester is your best bet: Not only is it a 6/6 flying Dragon, but it'll reanimate more of your creatures as it takes huge chunks out of your opponent's life total. If you haven't gotten Teneb into your graveyard yet, you have plenty of other options, like Phantasmagorian or Jedit Ojanen of Efrava. Your opponent will have a hard time dealing them with on turn 4!

As the game goes along, you'll accumulate so much land that you can simply play any of your giant creatures from your hand, which means Evolution Charm becomes useful as a resurrection spell as well. When your creatures won't stay dead, who can stand in your way? 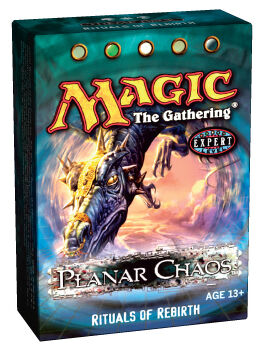 The 2 rares in this deck are Jedit Ojanen of Efrava and Teneb, the Harvester.

The timeshifted cards in this deck (from Time Spiral) are Resurrection, Sengir Autocrat, Spike Feeder, Twisted Abomination and Wall of Roots.

The timeshifted cards in this deck (from Planar Chaos) are Essence Warden, Fa'adiyah Seer, Harmonize.

Unraveling Mind is a theme deck from Planar Chaos, focussing on madness.

Undertaker may be the most helpful card in the deck. It lets you discard a card to return a creature card from your graveyard to your hand. Set it up with two creature cards with madness and you've got a reanimation loop: Whenever one of the creatures dies, discard the other one (and play it) to return the first one to your hand!

Eventually you'll be able to close out the game with large creatures like Reckless Wurm or Phantasmagorian, with evasive attacks from Mirri the Cursed or Trespasser il-Vec, or simply with a final Disintegrate. Drive your opponent crazy—as crazy as you! 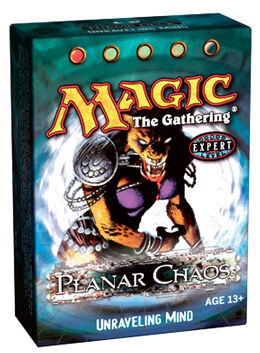 1 Magus of the Arena

The 2 rares in this deck are Magus of the Arena and Mirri the Cursed.

The timeshifted cards in this deck (from Time Spiral) are Browbeat, Dauthi Slayer, Disintegrate, Fiery Temper and Undertaker.