This page is about the expansion. For the app, see Magic: The Gathering Portal. For portals that allow travel between planes, see Planar portal.

Portal is a starter-level set released on May 1, 1997.[2] It was Wizards of the Coast's first major attempt at a set catering to prospective and newer players. It was designed to provide them a format with simpler rules than a core set or an expansion set. 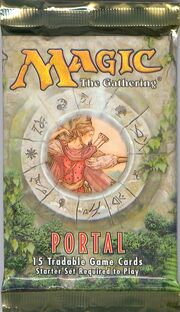 In an effort to facilitate learning Magic, Portal was markedly aesthetically and mechanically different from previous non-starter-level sets. To simplify game play, Portal featured no instants, enchantments, or artifacts and, subsequently, had a simpler set of rules. Some sorceries could be played outside the normal timing rules for sorceries, and these cards received errata as appropriate.[3] Creature cards printed in Portal featured no creature types, and their type line read "Summon Creature". These cards also received errata.

Portal also featured different terminology from that established in previous sets. These terms included "intercepting" for blocking, "deck" for library, "discard pile" for graveyard, "offense" for power, and "defense" for toughness. Although these new terms were intended to simplify learning Magic, particularly as a stepping stone for more complex sets, they were a source of distress for players when they moved up to using advanced-level and/or expert-level cards, which did not use this simpler terminology. Cards featuring these terms also received errata but are otherwise functionally the same.

To facilitate interpreting cards, the established layout was changed such that the power/toughness parameters printed on creature cards were accompanied by sword and shield symbols to more readily clarify the meaning of these numbers. Furthermore, rules text was in bold type to distinguish it from flavor text, and a thick line was drawn between rules text and flavor text to reinforce the distinction.

In the beginning, many on the design team were confused about the expectations behind the Portal concept. As a joke, they named it "Harvey", after the invisible rabbit in the famous play and movie; at the time, just like the fictional Harvey, Portal was big, invisible, and no one knew what it was.[4] Portal was not a legal set for official tournament play in any organized format until October 20, 2005, when it and other starter-level sets were made sanctioned for Legacy and Vintage formats.[5]

Portal was advertised as a beginners version of the game. Portal was sold in boosters (1 rare, 3 uncommon, 2 basic lands, and 9 common cards), as well as the Portal 2 Player Starter Set. 7 of the Portal cards included in the Starter Set feature additional rules text and are therefore different from their booster pack counterparts. Portal boosters feature artwork from Archangel, Merfolk of the Pearl Trident, Elvish Ranger and Spined Wurm.

Each Portal booster included one of ten different strategy cards with deck-building tips. There are 5 strategies described in all, one for each of the five friendly color pairs, with two different versions each:

Portal Demogame boosters were given away as a free product to advertise Magic. Out of the 24 Portal cards they contain, 6 cards feature additional rules text and are therefore slightly different from their counterparts found in booster packs. Portal Demogame boosters were also offered in the Guru program. The Official Guide to Portal explained the rules, featured an overview of the set with reproductions of all the cards, and hints on successful strategies for play and deck construction.

Cardboard folding binoculars given out during Portal promotions.

WotC launched a major advertising campaign, including commercials on MTV and popular TV shows, to introduce Magic to a major audience. They expected some players to stick with Portal but most to learn with it and the move on to standard Magic. As it turned out, most people learning Portal were taught by experienced Magic players, and when those players used standard rules and terms rather than the Portal ones, the differences caused confusion. This would be rectified in Portal Second Age.

No specific storyline was developed for Portal, but flavor is conveyed throughout the flavor texts of cards.

Portal introduces no new themes or mechanics to Magic, and was essentially the same game introduced in Limited Edition, with exception to the absence of instants, enchantments, and artifacts.

Since there are no instants in Portal some cards were reprinted as sorceries:

For the content of the decks, see Portal 2 Player Starter Set.

While Portal was full of vanilla creatures and simple spells, a few of its cards have had some impact on Magic as a whole and on the Core Sets in particular: