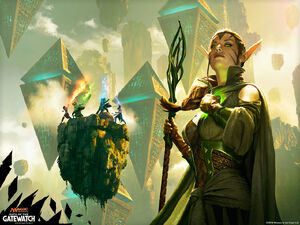 The Gatewatch swore to protect the Multiverse

The story of Magic: The Gathering was always focused around extraordinary individuals who were able to travel freely within the Multiverse. In the early years, these stories would often focus around the plane of Dominaria, Urza, the Weatherlight Crew, and the Phyrexian invasion. Later, the story started to utilize the block structure of the releases. Each block would introduce a new plane, and with the Mending, the story focus would shift towards various Planeswalkers who would explore these planes. Some planes would be revisited in later blocks.

Novels and comics were the main form of distribution until Magic Story - a weekly short story column - was introduced. The paper releases have been discontinued, but the Magic Story is available for free on the Wizards of the Coast website.

In recent events the Gatewatch was founded to answer in multi-planar threats like the Eldrazi or Nicol Bolas. Whenever a plane was in need of help, they would be there to protect its inhabitants.