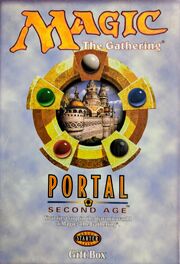 This 2-Player Starter Set was part of Wizards of the Coast's ongoing attempt at a product catering to prospective and newer players. It was designed to provide them a format with simpler rules than a core set or an expansion set. It was released in several languages. A Gift Box edition featured additional content. 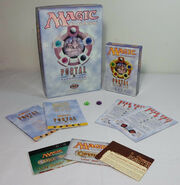 The Gift Box is actually a bigger box that packages the regular box product with additional content.[1]