Predator was the name of the Rathi/Phyrexian skyship created explicitly to aid in the control of the Kor, Vec, Dal, and the Skyshroud elves. It was placed under the brutal command of Greven il-Vec and was used to terrorize the natives of Rath, who lacked a way to fight back against such a vessel. This resulted in it earning the nickname "Scourge of the Skyshroud".

The 500-foot flagship was made of metal and Phyrexian technology, making it heavily armored and excessively armed. Its design suggests that it was quite ancient. The masts were dirty ivory tusks hoarded from an unimaginably large and powerful beast, and the junklike sails were rumored to be taken from the hide of that same creature. One stabilizing sail sat above, two stretched in a "v" shape below for added propulsion when winds were favorable. When not needed, the bottom central mast folded flat between the side sails. A metal rudder directs the twin exhaust for horizontal steering, and internal vent fins in the cowlings controlled vertical ascent, descent, and roll. The masts and rigging don't feature chains or ropes like other ships, but a flowstone-like mimetic black metal. The Predator features eight decks that hold officers, cannons, and ballistae, quarters for the hundreds of moggs that acted as marines, and possessed a vast cargo hold. It also featured a huge harpoon weapon that could transmit electrical current down its cable, or fire directly off the metal tip like lightning.

The main propulsion came from a Phyrexian engine powered by a dimensional aperture, spewing a high-pressure, toxic gas. This semi-living abomination, housed in the ship's lowermost deck, supplied most of the energy needs of the ship, primarily the motive thrust. If needed, the engine can crawl out of the ship when it needs maintenance. When not walking, its legs plug into the bulkheads. 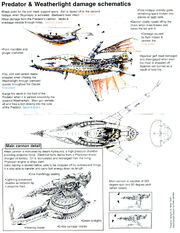 Weatherlight first encountered its nemesis following the kidnapping of Captain Sisay. When Weatherlight planeshifted to Rath it was ambushed by the Predator, which attached grappling lines and boarded her. In the ensuing battle, Predator's crew took Karn, Tahngarth and the Legacy artifacts hostage, although their main prize -- Gerrard Capashen -- was knocked overboard into the Skyshroud Forest, and their commander Greven was almost killed by deliberate attack from first mate Vhati il-Dal. As the on-deck battle was drawing to a close, Predator disengaged her attack and returned to the Stronghold with her captives.

Predator and Weatherlight dueled again following the Weatherlight crew's costly but successful rescue mission to the Stronghold. This time Weatherlight was racing to the planar portal being kept open by Ertai and therefore Predator lacked the benefit of surprise and had barely enough speed to keep up with the smaller vessel. As a result, the battle instead compared the weaponry of the two vessels, with Weatherlight's smaller, more maneuverable design and better-trained crew giving it the edge against its bulkier but better-armed opponent. Weatherlight just managed to get to the portal and escape her pursuer, with both vessels sustaining major damage.

After Weatherlight's escape, Predator mainly stayed in dry-dock at the Stronghold for repairs after its battles with Weatherlight. While there, she became the target of a sabotage mission by Rathi rebels, including Eladamri and Lin Sivvi, who saw an opportunity to destroy the vessel whilst she was out of service. Unfortunately, they were foiled and the vessel was fully repaired in time for the Rathi Overlay.

Once Rath had overlaid with Dominaria, Predator found that she was no longer as potent a weapon as she had been on Rath. Overshadowed by the larger Phyrexian vessels, Predator served mainly as the protector of the Stronghold. Predator battled Weatherlight for the final time over Urborg, where she again managed to ambush and board her opponent. This time Ertai, bitter after having been left behind on Rath, managed to capture Gerrard and teleport him directly into the Stronghold. However, the battle between the two ships went badly for Predator, as her moggs were outclassed by Weatherlight's veteran crew, and Greven himself was killed by Tahngarth. The ship sustained heavy damage from Weatherlight's improved weaponry and was soon destroyed by being sent crashing into the Stronghold.