The Pro Tour, abbreviated PT, was a series of major invitation-only DCI-sanctioned Magic: The Gathering tournaments, held about once every three months from 1996 to 2018.[1][2][3]

The first Pro Tour, as envisioned by Skaff Elias, was held in New York City on February 17–18, 1996.[4][5] More than twenty years later, in 2019, they were rebranded as Mythic Championships.[6] In 2020, this was changed again, to Players Tour.[7] MPL players will also be invited to Mythic Invitationals and all Tabletop Players Tour events. 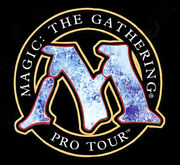 Even early on in Magic history, there had been high-prestige tournaments that had attracted a lot of top players, most notably the 1994 World Championships, the first major tournament, which ran over three days of competition. However, the winner, Zak Dolan, received a trophy and a large number of booster packs from various sets, but no money.[8] Similarly, the 1995 World Championship winner, Alexander Blumke, won a box of Legends and some miscellaneous packs.[2] In 1995, Magic Brand Manager Skaff Elias felt that Organized Play needed to step up to the next level. Players had to have something to aspire to. Thus was the Pro Tour created.[9][10]

The first Pro Tour, very briefly called the Black Lotus Pro Tour, was held on 16–18 February 1996 in New York. Known as "Pro Tour Speed Dial" and "The Showdown in New York",[11] Michael Loconto from the United States ended up the winner, taking down 1994 Worlds finalist Bertrand Lestrée in the final. Loconto pocketed $12,000 for the win, much more than the winners of the early major tournaments got, yet a lot less than future Pro Tour winners would earn. The event was not streamed live, but a video was later published by Wizards.[9] In addition to the main event, there was also a junior Pro Tour for players under eighteen. The junior Pro Tour continued for a couple of years, until it was transformed into the Junior Super Series. The first Pro Tour season included three more Pro Tour events, culminating in the final Pro Tour, the World Championships, held at Wizards of the Coast's corporate offices in Seattle.

Since 1996, Pro Tours have been held every year, with the number of events varying from three to seven per year. Pro Tour Shadows over Innistrad in Madrid in April 2016 was the 100th Pro Tour event.

Pro Tours are invitation-only events. There several ways to qualify, and the complete list can be found in the Magic: The Gathering Premier Event Invitation Policy. Currently, the most common ways are:

Until 2011, players could also get qualified for the Pro Tour by having a sufficiently high DCI rating, and for Pro Tour Dark Ascension in 2012, the players with the most Planeswalker Points during the previous season were also invited.

With the exception of WPN Premium Series winners, Silver-level pros, and Hall of Famers, players qualified for the Pro Tour also get airfare paid by Wizards of the Coast. Hall of Famers do get an appearance fee of $1,500 for participating in the first Pro Tour event in the season, however.[12]

Traditionally, Pro Tours other than the World Championships have been three-day events with 11 to 16 rounds of Swiss play on the first two days, before a cut to the top eight players, who on the last day of competition play quarterfinals, semifinals, and finals to determine a winner. Reaching a Pro Tour top eight is considered a major accomplishment, and players are often measured by how many top eights they have achieved during their career. At the beginning of 2016–17 season, top-seeded players coming into the top eight advanced directly to the semifinals, while the lower seeds had to play in two quarterfinal stages.[13] This bracket format was discontinued after two events however, due to Wizards deeming this structure had much less effect on reducing the amount of intentional draws than they had hoped.

Since Pro Tour Honolulu 2009, all Pro Tours have been 16 rounds of Swiss, with each day consisting of five rounds of Constructed and three rounds of Booster Draft. The constructed part has been either Standard, Extended, Modern, or Block Constructed. Starting with the 2014–15 season, three of the four Pro Tours use the Standard format, with the last one using Modern[14] (during the 2016–17 season, however, the Constructed portion of all four Pro Tours were Standard, and the 2017–18 season featured two parts Standard, one part Modern, and one part Team Constructed).

Prior to the 2009 season, Pro Tours other than the World Championships were held in a single format.

Prior to the 2012 season, the World Championships were typically a four- or five-day tournament with 18 rounds of Swiss play. The most common structure was six rounds of Standard on day one, six rounds of Booster draft on day two, and six rounds of either Extended or Block Constructed on day three. The fourth day was the team portion day, with the teams usually playing four rounds of Team Rochester draft or Mixed Constructed. The fifth day included both the top eight playoff for the individual competition, held in Standard, as well as the Team Finals.

The current prize purse amounts to $250,000, distributed among the top 64 finishers as follows:

Unlike money, for players outside the top eight, Pro Points are awarded based on match points in the tournament rather than final standing.

In addition to Pro Points, the winner receives an invitation to next season's World Championship, and a special Platinum-level promotion in the Pro Players Club for five cycles (roughly equal to a one-year period).

The Pro Tour Season usually consists of three to four Pro Tour events spread through the calendar year. The last event of the season is the summer Pro Tour, usually held in late July or early August.

Prior to the 2005 season, the season ran roughly from August to the following August, culminating with Worlds in August or early September. The 2005 season was extended, with it beginning after the 2004 World Championships in September 2004, and ending with the 2005 World Championships in December 2005. From 2005 to 2012, the seasons were run as a unit of year (half year in 2012), which consisted of three to five Pro Tour events spread throughout the calendar year. The current season setup started halfway through 2012.

Starting with the 2012 season, all Pro Tour rounds were named after the most recent expansion instead of the location of the venue, and were held two weeks after the release of that expansion. Starting with Pro Tour Ixalan, the interval between the expansion and the Pro Tour were no longer fixed, and as of Mythic Championship Cleveland 2019, Pro Tours are no longer tied to sets.

Player of the Year[edit | edit source]

Main article: Player of the Year

Rookie of the Year[edit | edit source]

Main article: Rookie of the Year

Pro Points were earned through participation in a Pro Tour event, the World Championship, or the World Magic Cup.[18] Points can also be won through high Grand Prix and National Championships finishes. The amount of Pro Points won depends on the finish in the event.

The last event to award Pro Points was the Grand Prix at MagicFest Seattle, June 21–23, 2019. After this, the system was replaced by Mythic Points.[19]

The Pro Players Club is a reward system associated with the Pro Tour. Points accumulated during the season determines the players' level in the club, each with different benefits. The levels and their benefits are, as of August 2018:[20]

On September 16, 2018, the level thresholds for Silver and Gold were changed to 22 and 37, respectively.

The Pro Players Club was terminated in 2019, when Magic Esports were introduced with the Magic Pro League and Mythic Championships on MTG Arena.[6] Pro Points were frozen for players outside of the MPL.

A player that has never played in a Pro Tour event, World Championship, or World Magic Cup is considered to have Amateur Status. Prior to September 2006, Amateur Status only applied to players who did not have any lifetime Pro Points. Since Pro Points can be won by a high enough finish at a Grand Prix, it was previously possible to lose your Amateur Status without ever playing at a Pro Tour.

Until 2007, the top finishing Amateur players at GPs won a prize; nowadays, Amateur status is only used to determine who is eligible for the Rookie of the Year title.