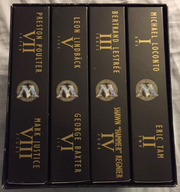 The best Pro Tour decks of 1996, eight in total, were released altogether in a Pro Tour Collector Set. Only 20,000 of these sets were produced.

The set originally retailed for $125 US and became available in May 1996. They were the first of a series of high-profile preconstructed decks for experienced players. Carefully chosen, they are imitations of the eight most successful deck archetypes present at the 1996 Pro Tour in New York. In order to avoid printing legal top rated tournament-level cards, all cards were made illegal for tournament play by printing them with a non-standard backside. Additionally the cards feature a golden border and have a gold signature of the deck's creator. The back of the cards feature the Magic: The Gathering Pro Tour logo and are labeled "Inaugural Tournament New York City February 1996."

Part of each deck is a bio card which provides some background of each player and a deck list card which lists the content of each deck. Additionally blank cards were added to raise the number of cards per deck to 90.

This Pro Tour used an interesting deck construction format, a variation of the Standard or "Type II" format. In addition to the usual restrictions for Standard decks, each deck was required to contain at least five cards from each of the legal expansions. Meeting this requirement without lowering the efficiency of the decks gave the deck-builders an interesting challenge.

These cards were written under Fifth Edition rules.

These cards are not legal in any DCI-sanctioned tournaments.

“Loconto, a 26-year-old social worker from Grafton, Massachussets, played a blue-white Millstone deck that generally defeated his opponents by running them out of cards. One innovative concept was his addition of Hallowed Ground, which he used to protect himself against Armageddon, to activate his Land Tax, and to save his Mishra's Factories from destruction.”

“Tam, an 18-year-old student from Ontario, Canada, played a red-green-white deck with large and unvulnerable creatures, plus a variety of red and white spells for creature suppression. He created a mid-game lock with the only blue card in his deck, Zur's Weirding.”

“Lestrée, a 25.year.old business development strategist from Pantin, France, played the most popular deck type at the tournament, a green-white Armageddon/Erhnam Djinn deck with strong mass destruction capabilities. Lestrée's most interesting playing quirk was his constant use of extra life (mostly from Ivory Tower and Zuran Orb) to draw extra cards with his Sylvan Library.”

“Regnier, a 27-year-old comic bookstore owner from Manchester, New Hampshire, played a blue-white Millstone deck with very heavy permission (including 12 counterspells). A former professional arm wrestler, "Hammer" had a very relaxed, conversational style which he used to unnerve his opponents.”

“Lindbäck, a 20-year-old electrical engineering student from Stockholm, Sweden, played an all-black speed/discard deck. Most noticeable in his deck were four Necropotences which Lindbäck would play early to continually fill up his hand.”

4 Order of the Ebon Hand

1 Dance of the Dead

4 Order of the Ebon Hand

“Poulter, a 22-year-old chemistry graduate student from Irvine, California, played a variation of the tournament's prevalent green-white decks. With only nine creatures in his deck, Poulter used Aelopiles and Hurricanes for creature suppression and direct damage.”

“Justice, a 25-year-old card shop owner from West Walley City, Utah, played a red/artifact control deck with a touch of white for Balance and Swords to Plowshares. The creatureless deck used Winter Orbs to lock down the opponent until the direct damage could finish them off.”