For the novel, see The Prodigal Sorcerer. 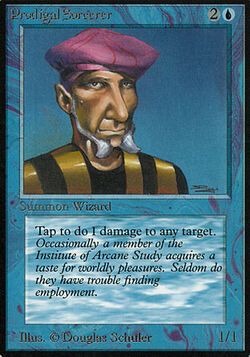 The card was introduced in Alpha, where its artist credit was incorrect, with Douglas Shuler misspelled as "Douglas Schuler". The card featured creature type Wizard (only) in Alpha; but, in Time Spiral, it gained the Human racial creature type to complement its class creature type.

The card is nicknamed "Tim", after the "Tim the Enchanter", a wizard portrayed by John Cleese in Monty Python and the Holy Grail and who had a talent for fire-based magic and damaging things.

The nickname "Tim" has inspired nicknames for other similar cards, such as Rod of Ruin ("Tim on a stick"), Hermetic Study ("Tim on a whim"), Pirate Ship ("Tim on a ship"), Rootwater Hunter ("Tim who can swim", "swim Tim", or "fish Tim"), Thornwind Faeries ("flying Tim"), and Zuran Spellcaster ("Zim" or "icy Tim").

Prodigal Sorcerer was reprinted in every Core Set up until Seventh Edition.

In Time Spiral, it gained the Human racial creature type to complement its class.

Introduced in Planar Chaos as a red timeshifted version of Prodigal Sorcerer, Prodigal Pyromancer, nicknamed "Tom" for unknown reasons, other than "Tom" was the design file name,[1] was thought to be more appropriate given the understanding of the color pie then.

Prodigal Pyromancer was later reprinted in Tenth Edition, thus cementing R&D's position on damage-dealing creatures in red, not blue. It also featured in Magic 2010 and Magic 2011.