Purphoros is the God of the Forge on Theros.

Purphoros is associated with the forge, the restless earth, and the fire. He rules the creative force of heat and energy in the souls of sentient beings: this energy is chaotic, something that needs to be harnessed and shaped by labor and passion. For this reason, Purphoros is also the god of artisans, obsession, and the cycle of creation and destruction. His forge burns in the heart of Mount Velus, attracting dragons with its blistering heat.[1]

The mere presence of Purphoros is inspiring. He forges the most ornate and delicate items, only to dash them into flame and start again. Purphoros once loved Nylea, the god of the hunt. His passion inspired his most astounding works of art.[2] The divine blacksmith is reasonable yet unrestrained, following no rules save his own creative and destructive impulses. Sometimes, this means covering a whole area with lava to make way for something new. Purphoros' main flaw is that he feels easily frustrated, limited, and constrained. For this reason, he's always pushing against the barriers of mortal imagination, sensing that there is much more to express. This can cause him to plummet into despondency and then lash out at the world with raw destruction.

Followers of Purphoros brought the secret of bronze to Theros, forging stronger objects and armaments than any created previously, and the most sanctified shamans of Purphoros also possess small quantities of metal said to come directly from the god's forge, iron. Not only smiths worship him. Artists, humans and the satyrs especially, worship Purphoros on altars built on volcanic slopes. Warriors give him homage when lighting a bonfire. Potters inscribe their works with markings meant to honor him. 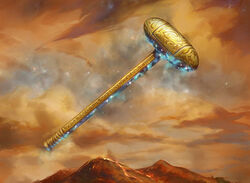 Purphoros wields Akmon, a large hammer whose head is similar to an anvil. A blow from Akmon can render the earth molten, and when it strikes metal, each spark becomes a new enchantment, some of which can even take on life. Among Purphoros creations are the oreads, shaped out of stray coals from his forge[3], and the manticore. It is said that Purphoros forged the manticore's tail from bronze, its teeth from silver, and its heart from hate.[4]

To fight the sun god Heliod, Purphoros created the Sword of Chaos, which was capable of damaging the divine.[5] The two gods battled, disrupting the celestial resting place of an ancient and powerful Hydra: Polukranos, World Eater. Enraged, the hydra stormed through the mortal realm of Theros until it was sealed by Heliod and Nylea.

The Planeswalker Elspeth Tirel arrived in Theros during the climax of Heliod and Purphoros's battle. She saw Purphoros' sword flung from his hands, and planeswalked away with it.

When Heliod instructed his champion, Daxos, to remove all trace of the other gods from the city of Meletis, Purphoros and the other gods, refusing to stand for such an affront, called upon their own champions from the Underworld. Purphoros' chosen was Anax, once king of Akros. Entering the fray, Purphoros' intent was to recast all the world into the fires of his invention.[6]

The character of Purphoros is inspired by Hephaestus, the Greek god of fire, metalworking, masons, and sculptors. However, the name "Purphoros" is Greek for "torchbearer", and is usually associated with Prometheus.