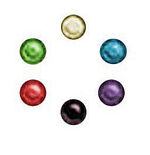 Planar Chaos 's position of purple in the color pie

Purple is the color of the expansion symbol of the timeshifted cards in Time Spiral. Because they appeared in a rarity significantly different from any other rarity, they were assigned their own new rarity level (higher than rare).[1]

Ever since a prank article in the InQuest #22 (February 1997) which featured purple cards (see Gallery), purple has been speculated to be the unreleased sixth color of Magic.[2]

A sixth color was briefly discussed for Odyssey.[3]

For Planar Chaos R&D actually playtested purple as a sixth color in the color pie,[4] to convey the alternate reality of the set.[5] A purple version of Mana Drain was planned[6] and the basic land would've been either City or Cave.[7]

When asked about the theoretical case of adding purple as a sixth color, Mark Rosewater has said that he would nowadays add it to the center of the color pie, so that it would not specifically be an ally or enemy of any color but rather a totality of all the colors.[8] This way, instead of it trying to carve out its own space in the color pie, it would borrow equally from all five colors. It would be a mix of abilities, almost all things the five colors can do, but mixed and matched in such a way that it could do things that couldn't normally be done in monocolor. This would also allow R&D to make some hybrid cards (probably a cycle) that are purple and another color. Finally, Rosewater said that if this were the case, he would look for a new mechanic that plays in a novel space that he would allow only the new color to have access to.

The M21 showcase card frames connected to Liliana Vess are purple, standing in for black as visually more appealing.