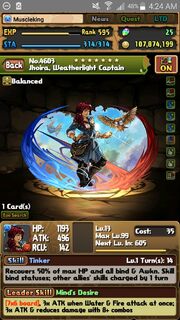 Puzzle & Dragons is a tile-matching video game with role-playing and strategy elements, developed by GungHo Online Entertainment for the iOS, Android Android and other platforms. The game is free-to-play and financed by the sale of in-game currency. In 2018 (June 25 - July 8), the game featured a temporary Magic: The Gathering Collaboration ("Collab").[1]

The game requires players to move and match colored orbs arranged in a grid. The amount and type of matches determine which of the six monsters on the player's team attack the waves of enemy monsters and how much damage they do. An additional layer of challenge is the acquisition, selection, and improvement of a team of monsters from among thousands ranging from standard fantasy fare, to deities from several religions and mythologies and characters from popular entertainment franchises. They then play dungeons where they solve a tile-matching puzzle that determines how powerful their monsters' attacks are on waves of enemy monsters. Players collect their monsters as rewards for completing the game's dungeons or spending in-game currency at the "Egg Machines".

Puzzle & Dragons is known for its collaboration events with several other video games and anime properties. During collaborations, Special Dungeons and special Collaboration Egg Machines are added to the game which contain monsters that can otherwise never be obtained again. The M:TGs Collab featured the Demonlord Belzenlok as the final boss in the Magic: The Gathering Collab dungeon. The dungeon came in five difficulties ranging from Intermediate to Mythical. Defeating the enemies in this dungeon gave players a rare chance to receive "cards" with the same skills as the collab characters as well as the Navigator's Compass. Karn, Jhoira, and several other characters received "Ultimate Evolutions" and Navigator's Compass could perform an "Assist Evolution" to become the Skyship Weatherlight.[2]