Radiant was the archangel in charge of the planeswalker Serra's armies on Serra's Realm. Under Phyrexian influence, she took command of the Realm after the planeswalker had left. She had a sharp tongue and was quick to enact judgment.[1][2]

Radiant occupied Serra's Palace after Serra's departure from the plane. Falling far short of Serra's omnipotence, she was unable to make use of the throne room's fractal views of the entire plane, an intense, disorienting array that pained her over the years. This was mitigated when armor of steel and mirrors were installed to protect her, effectively darkening the palace, which she had already largely hollowed out to make room for battlements and guard posts in the wartime. She was unable to restore the realm as she was deceived into working against her own people, allowing her Phyrexia-tainted angels to slaughter the plane's terrified inhabitants to siphon power to Phyrexia. This ultimately caused the realm's collapse. 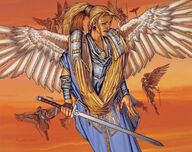 Urza came to the realm in hopes of saving it from Phyrexia's grasp, but the discovery of the extent of the plane's corruption and souring negotiations with Radiant requires him to stage an exodus, to save the remaining inhabitants. Radiant attempted to prevent this, and in a battle nearly managed to kill him by tearing out the Mightstone and Weakstone from his skull. She died when she tried to reunite these two stones, causing a blast of power that destroyed the palace. Before her form was rent apart, her last words were, "I am the mad one!", a final realization of her naivete.