Ravnica Allegiance is the 80th Magic expansion. It was released on January 25, 2019.[4][5] Officially, it is not part of a block. However, it is part of a series of three that is set on the same world, unofficially called the Guilds of Ravnica block.[6] 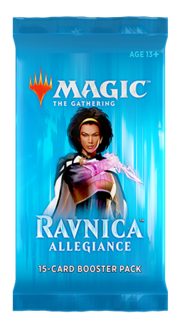 Ravnica Allegiance contains 259 cards (111 commons, 80 uncommons, 53 rares, and 15 mythic rares), but there are only 254 functionally different cards since all gates have 2 common slots. Boosters may include randomly inserted premium versions of all cards. This set features five of the bi-colored Ravnican guilds: Azorius (

). Watermarks are used to better identify the guilds.[7]

The 5 basic lands of this set are not included within the 259 cards, meaning that they won't appear in booster packs but only in the planeswalker decks and the Bundle, and are numbered from #260/259 to #264/259. Neither contained in boosters are the 8 additional planeswalker deck exclusive cards - numbered #265/259 to #272/259 - and the Buy-a-Box promo, which has the number #273/259. Like in the previous set, each Guildgate is featured in two common slots, each with different art.

This is the penultimate moment of the Gatewatch's fight against Nicol Bolas. Darkness is coming to Ravnica. A conflict that could tear apart the world itself looms large, and the fragile peace between the guilds is strained to its breaking point. Now, with everything on the line, it's time to step up, prove your loyalty, and fight for your guild.

The cards that represent the Story Spotlights in Ravnica Allegiance are: Rampage of the Clans (

Ravnica Allegiance is sold in regular 16-card boosters (one card being a marketing card), two planeswalker decks, the Ravnica Allegiance bundle and a Deck Builder's Toolkit.[8] As in the previous set, 35-card bi-colored Theme Boosters are connected to the appropriate guilds, containing one or two rares/mythic rares. The set is further accompanied by five guild kits, preconstructed theme decks that combine cards from every Ravnica set released so far. 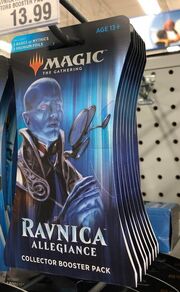 For Ravnica Allegiance, Wizards of the Coast also sold "Collector Boosters" that contain 15 cards for $12.99:[12] They contained:

This was a very limited experimental test run. Collector Boosters were only available in Japan and North America, and even then, they weren't widely available.

The sixteenth card in the boosters is a token card or an emblem, with advertisements on the back side.[15][16] There are thirteen tokens and one emblem in the set:

Ravnica Allegiance has twelve cycles, two of which are reprints.

Ravnica Allegiance has one mirrored pair.