The Ravnica block is the 11th Magic: The Gathering block, comprising of the large expansion Ravnica: City of Guilds () and the two small expansions Guildpact () and Dissension (). The block was released in 2005–2006.[1][2]

The development codenames for Ravnica block expansions are "Control", "Alt", and "Delete".[3] 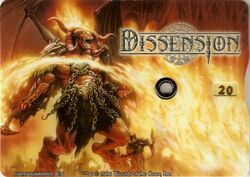 Thematically, the Ravnica block was multicolor-centered and, thus, was the spiritual successor to the Invasion block of 2000–2001. The Ravnica block was the first block to introduce the "guild model", wherein a number of guilds, each of which with its own cards and abilities and/or keywords, would be as introduced in an expansion and be as developed and complex as they would be (until returning to the plane with Return to Ravnica block), rather than the traditional model of expansions, wherein abilities and/or keywords would be introduced in the first of usually three expansions and then progressively increase in complexity throughout the block. Four guilds (Boros, Dimir, Golgari, Selesnya) were introduced in City of Guilds, three more (Gruul, Izzet, Orzhov) were introduced in Guildpact, and the final three (Azorius, Rakdos, Simic) debuted in Dissension.

The keywords introduced in the Ravnica block are:[4][5]

In addition to these 10 keywords, the Ravnica block was the first block to feature hybrid mana costs and hybrid cards. Each of Ravnica's 10 guilds featured three hybrid cards, one at each level of rarity as of then; common, uncommon, and rare.