Renaissance, a reprint set very similar to Chronicles, was only released into German, French, and Italian markets. It was sold in booster packs of eight cards which included six commons and two uncommons. Each card carries the expansion symbol from the set it was originally printed in.

The German and French versions are the same. They are black-bordered and contain all 122 cards that rotated into 4th Edition from expansions and sets that were not printed in the two languages. The breakdown is: Arabian Nights (10 cards), Antiquities (23 cards), Legends (55 cards), The Dark (32 cards), as well as 2 cards from Unlimited which were not printed in Revised (Ironclaw Orcs & Twiddle). The idea behind the release of this set was due to a company policy that stated that a card could not be put into a white-bordered set without first appearing in a black-bordered set in that language. The number of cards in each color is not the same, there are 18 white, 18 blue, 19 black, 23 red, 16 green, 25 artifact and 3 land cards. 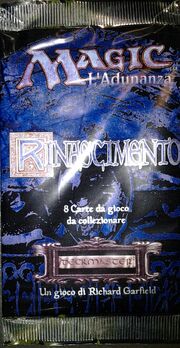 The Italian version of Renaissance (named Rinascimento) is black-bordered and contains only 60 cards, all of which were taken from Arabian Nights, Antiquities and Unlimited (as Legends and The Dark were already printed in Italian). These are all the cards from those sets included in the German and French versions, minus Piety, plus all 26 cards from Arabian Nights and Antiquities that were reprinted in Chronicles.

Like Chronicles, Renaissance and Rinascimento were each printed on two 121-card print sheets. There were 3 times as many "common sheets" as there were "uncommon sheets". Some cards would show up multiple times on the sheet, making them more common than the cards which appeared only once. Unfortunately, there is no official distribution list for these sets other than common/uncommon, and the sparse sources disagree on the actual distribution.