The Renegades were a rebel faction in Ghirapur on Kaladesh. They were led by Pia Nalaar. 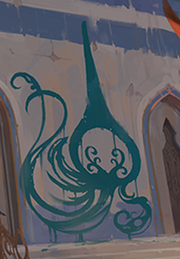 The Renegades believed that the Consulate was corrupt, and was infringing on their freedoms. They resorted to sabotage of government property and appropriation of resources for the common good.[1] The Consulate argued that they refused to adhere to safety regulations and aether quotas, and that they undermined the Consulate's efforts to provide structure and lawfulness.[2][3]

The symbol of the Renegades was the Leaking Spire, an upside down Consulate symbol with elaborate flourishes emptying out of the bottom. It signified that aether was meant to be returned to the people.[4][5][6]

After altering Gonti's hidden cache of artifacts into weapons, the renegades attacked the Aether Hub. The personnel of the hub yielded when faced with the superior numbers.[7] However, the Consulate took control of the Aether Hub again when the Gatewatch was distracted by a diversion attack by Baral and Dovin Baan.[8]

After the final defeat of Tezzeret, the Consulate yielded. The corrupt elements were removed and members of the Renegades were integrated into the Consulate in their place.[9]