For other uses, see Ravnica (disambiguation).

Return to Ravnica contains 274 cards (25 basic lands, 101 commons, 80 uncommons, 53 rares, 15 mythic rares), including randomly inserted premium versions of all cards in the set. As was the case with the original Ravnica block, Return to Ravnica focuses on the guild system and multicolor cards.[4][5] Five guilds — the Azorius Senate, Golgari Swarm, Izzet League, Cult of Rakdos, and Selesnya Conclave — are featured in Return to Ravnica; the other five guilds appear in the following expansion, Gatecrash.[6] Because R&D had to fit in five guilds, rather than four, the set contained more uncommon cards than usual.[7] It is is unknown what the expansion symbol of this is set is meant to represent, though some people think it is a stylized Orzhov Mitre, a nib of a fountain pen or a gate.

Main article: Return to Ravnica: The Secretist, Part One

As the name of the expansion implies, Return to Ravnica is set in Ravnica, a plane comprising a singular megalopolis or ecumenopolis,[12] in which a vast and diverse variety of inhabitants co-exist.[13][14][15] Once, the law of city and plane of Ravnica was dictated by the Guildpact and was controlled in relative harmony by the ten guilds, each of which representing a color pairing of the five colors of Magic. In Dissension, however, the Guildpact had been broken.[16] Faced with a magical code that is built into the very foundations of the city-world itself, Jace Beleren marches into the numinous depths of Ravnica's underbelly in search of the promise of powerful magic. Once buried in past, the code resurfaces as Ravnica's power-hungry mage guilds, unbound by the Guildpact that had once maintained order, struggle for control of the plane. 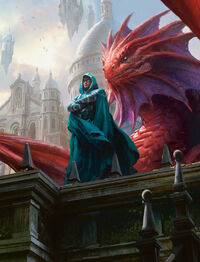 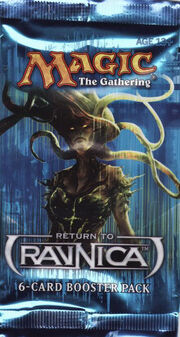 An early preview picture of the set showed Niv-Mizzet, the leader of the Izzet League, adjacent to planeswalker Jace Beleren.[2] Wizards of the Coast created a "Choose Your Guild" interactive quiz and Planeswalker Points Web page for the expansion, allowing Magic players to choose their guild. At the expansion's prerelease events on September 29–30, 2012, players chose their guild;[19][20] a choice that affected gameplay, as, in addition to receiving five Return to Ravnica boosters, players received a guild-specific sticker, an acceptance letter from their guild leader,[21] a spindown life counter, a promotional prerelease card, an achievement/challenge card, and an additional guild-specific booster.[22][23] The launch party was October 5–7, 2012 [24] and Game Day was October 27–28, 2012.

In September 2012, Mark Rosewater confirmed that Magic novels would return as e-books, with Doug Beyer writing them.[25] On November 28, 2012, Doug Beyer introduced the novel written for Return to Ravnica as The Secretist, with the first part being available from then onwards as an e-book.[26] The novel is centered around Jace Beleren.

In addition to interactive online activities and promotional cards, after widespread interest expressed on the part of the people on Twitter, Wizards of the Coast paired up with licensing partner Araca to produce guild t-shirts[27] and baseball caps.[28]

These cards were also available in the intro packs as foils, albeit without the alternate art and prerelease date.[29]

Other alternate-art promotional cards were:[30] 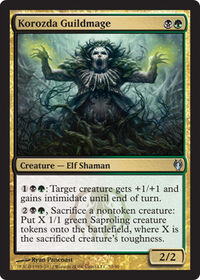 Korozda Guildmage, a gold-mage and a producer of green 1/1 Saproling creature tokens.

The sixteenth card in the boosters is a token creature card. Although there are advertising cards on them, one of which featuring Gideon Jura on its front face, there are no "Tips & Tricks" cards associated with Return to Ravnica.[31]

The Return to Ravnica tokens, in the order in which they are listed, are:[32]

Return to Ravnica revisits five of the ten Ravnica block bicolored guilds, each of which with its own keyword or ability word that is similar but not identical to the original one.[34][35][36] As a returning mechanic, the set also featured hybrid mana.[37] Development focused efforts on building a 'slow' and 'fast' strategy into each guild.[38]

To note: the Guilds are presented in the official

Other themes and mechanics include:

For cycles that are part of the guild mega cycles, see Return to Ravnica block#Mega cycles.

Return to Ravnica has one mirrored pair and one matched pair.

Although Rakdos's Return and Sphinx's Revelation are an apparent mirrored pair, with their similar, but opposite, effects and similar, but non-identical, casting costs, Mark Rosewater has stated they are not in fact a mirrored pair, neither intentionally nor unintentionally, on multiple occasions.[43][44] Furthermore, the sphinx referred to in Sphinx's Revelation is not, or at least not necessarily, Isperia, the guildmaster of the Azorius Senate in the Return to Ravnica block.[45] Rosewater has, however, said that Magic players, being who they are, will invariably think that the two cards are a mirrored pair, and that they are what people see them to be; either a mirrored pair or not.[46]

The following cards have been reprinted from previous sets and included in Return to Ravnica: