The Revised Edition, or Revised as it is commonly called, is the third edition of the Magic core sets. It was released in April 1994. 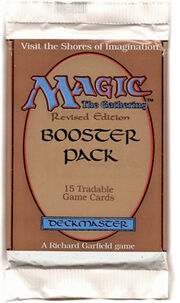 Wizards of the Coast made multiple attempts to print an improved version of the Core Set before finally getting Revised out the door.[2] Revised consisted of 306 cards. The set was originally designed without a visible marker of rarity as Wizards of the Coast wished for the specific rarity of each card to remain hidden; however, with the eventual inclusion of rarity on the card face, they retroactively determined the rarity of each card in the set (15 Basic lands, 75 Common, 95 Uncommon, 121 Rare). Revised was the first Core Set to "rotate" some cards out, some of which were considered to be "problem cards," and replace them with other cards from previously printed limited expansions. The expansions available at the time were Arabian Nights and Antiquities.[3]

Due to the printing process, it is possible to get basic land cards in an uncommon or common card slot. The chance is approximately 21.5% for uncommons and 38.02% for commons. This is because the printer put lands on all the uncommon and common sheets.

An early advertisement in The Duelist #1 stated that Revised cards would be gray-bordered, but they ultimately became white-bordered like the Unlimited Edition. A production oversight resulted in the "bevel" that framed the cards being cropped off. Also, well-used printing films gave the cards faded colors. Many players complained at the lack of quality of the set; both the card power and the look.

Cards were available from mid April 1994 through mid April 1995. The print run is estimated at 500 million cards.[4] The cards were sold in 60-card starter decks and 15-card boosters. The starter deck rulebook has Shivan Dragon on the cover and a checklist on the back and last pages. Revised was the first set that was supplemented with a special Gift Box. The Revised Gift Box (released on November 15, 1994) included two starter decks, 30 glass counters, a flannel bag for storing the counters, an illustrated rulebook and a card collectors' checklist.

Revised was the first set to be published in other languages than English: French, German and Italian. All had a black-bordered and a white-bordered print run.

As the players' knowledge of the game and its potential developed, so did the knowledge of the designers and developers. Their collaboration led to the first Magic: The Gathering Pocket Player's Guide, which solidified the rules of Magic. However, for later editions the rules would change many times over.

Revised introduced the first tap symbol: A slightly tilted T inside a gray circle. The artifact types Mono and Poly became obsolete, the types were removed from cards that had them and tap symbols were added where they were previously implied by the type. The set also changed references to mana color in card texts to mana symbols.[5]

Revised Edition has one cycle of four: the Air, Fire, Earth, and Water Elementals.

When the Revised Edition was in production in 1994, a number of problems with the set became apparent. The colors were washed out, the picture for Serendib Efreet was wrong, and there was a growing concern with the Satanic images on some of the cards. The solution was to print a fixed version of the Revised Edition, code-named "Edgar",[6] which has since come to be known as Summer Magic because it was printed in the summer of 1994. The cards were distributed in regular Revised Edition boosters – no Summer edition starters were produced.

Despite its intended function as a fixed Revised Edition, there were many problems with the printing. On some cards, the colors were too dark. Serendib Efreet had its artwork corrected, but the artist credit was not. The artist name for Plateau was not corrected. Hurricane was printed with a blue border and became the most famous and most desired Summer Magic card of all. Because of all these flaws, the entire print run was recalled for destruction which led to the great Revised Edition shortage of 1994. However, about four cases (40 booster boxes) of "Edgar" survived and were shipped to locations in the U.S. and the UK. Probable locations include Tennessee, Texas, and Ireland.

Summer Magic cards can best be recognized by their prominent 1994 copyright date (a feature missing in Revised), as well as their richer colors. Today a Summer Magic Birds of Paradise is worth well over a thousand dollars. Among the rarest Magic cards in existence are the blue Hurricanes.[7][8] 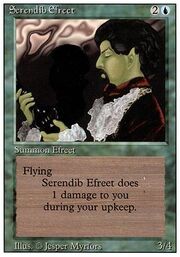 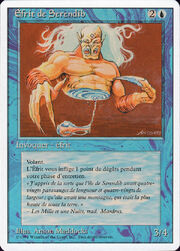