Rise of the Eldrazi

From MTG Wiki
Jump to: navigation, search
Rise of the Eldrazi
Intro packs

Rise of the Eldrazi is set like its predecessors Zendikar and Worldwake on the plane of Zendikar and continues the story line from those sets. However, unlike other third sets in a block, Rise of the Eldrazi is a large expansion.[4] The set contains 248 cards (100 Common, 60 Uncommon, 53 Rare, 15 Mythic, 20 Basic Lands). That's one common less than Zendikar and including basic lands which usually are not reprinted in the third expansion of a block. The free space on the print sheets was used for Hand of Emrakul and Ulamog's Crusher, which are more common than the other commons. Each set of basic lands (i.e. all Plains, all Islands ...) forms a collage when put together.[5][6] The expansion symbol of the set is an opened hedron. The set is a complete "mechanical reboot" of the block; unlike the two preceding sets it is not Land-themed and mechanics from the preceding sets did not return but focuses on a race of colorless creatures called the Eldrazi.[7][8] For this, the limited environment was slowed down, players were helped to speed up their ability to cast larger spells [9][10] and R&D found a way to make instants and sorceries matter.[11]

The colorless spells featured in the set have translucent boxes through which larger artwork can be seen. These colorless cards are put in front of colored cards in the numbering, despite Colorless artifacts being placed behind colored cards in normal sets.

Rise of the Eldrazi is the first non-first set in a block to have basic land cards. It is also a set which has an uncommonly low count of cycles. While regular Magic sets often have 10 or more cycles, particularly large sets, Rise of the Eldrazi only has two cycles that are not basic lands.

For thousands of years, Zendikar has had a reputation as a deathtrap. It's been a world of deadly perils to planeswalkers and native explorers, punishing any who seek to loot its hidden treasures and exploit its potent mana. But unknown to the plane's denizens, there's a sinister reason for Zendikar's danger: for millennia, the plane has served as a prison for the Eldrazi, astral monstrosities native to the Blind Eternities, the space between planes. Now, the perils facing adventurers on the plane of Zendikar have taken an even deadlier turn. The Eldrazi have been released.[12][13][14][15]

The Eldrazi have transcended the colors of mana as we know them. As a result, the Eldrazi progenitors themselves and those closest to them are colorless. But don't let the mana cost fool you—these Eldrazi are not artifacts. Each of the colossal Eldrazi spawns its own "brood lineage." The three brood lineages are composed of Eldrazi Drones and other subordinate beings, each reflecting the image of its progenitor. 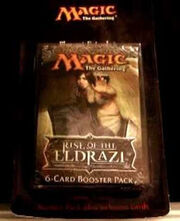 Rise of the Eldrazi 6-card booster

Rise of the Eldrazi was sold in 16-card booster packs, 6-card boosters, 5 intro packs[16] and a fat pack.[17] The regular boosters featured art from Gideon Jura, Sarkhan the Mad, Ulamog, the Infinite Gyre, Kozilek, Butcher of Truth, and Kargan Dragonlord.[18] The 6-card booster featured the art from Induce Despair.

The promotional card given to participants at the Prerelease tournaments was Emrakul, the Aeons Torn, one of the colorless Eldrazi creatures.[19] At the Launch party event, Lord of Shatterskull Pass was given away, which highlights Level up.[20] The promotional cards given to Game Day Event participants was a full-art Staggershock, winners received a foil full-art Deathless Angel.[21] The Buy-a-Box card was Guul Draz Assassin. Visitors to PAX East received a personalized “Eldrazi Death Hug”.[22]

Regular boosters of Rise of Eldrazi come with a bonus sixteenth card that is either a “tips & tricks card” or a creature token from Rise of Eldrazi. One face of the Rise of Eldrazi bonus card has one of five different rules tips or is one of six different creature tokens. The other face has one of 13 advertisements for organized play programs, Rise of the Eldrazi, Duels of the Planeswalkers for Xbox Live, Magic Online, fat packs, Zendikar: In the Teeth of Akoum and Ultra Pro products for Magic.

The Rise of Eldrazi tokens in numerical order are:[23]

The set features a number of large colorless creatures called Eldrazi which were previewed with Eye of Ugin from the previous set, Worldwake.[25][26] The first creature to be shown was Kozilek, Butcher of Truth which also features the mechanic Annihilator which forces the defending player to sacrifice a number of permanents when the creature with Annihilator attacks. The set also contains the first Instant and Sorcery spells without colored mana in their casting cost. For this purpose the set also brings back Tribal cards. There are four tribal colorless cards in the set, all with the creature type Eldrazi and a converted mana cost of 7 or greater. The four tribal cards in the set are Not of this World, Skittering Invasion, Eldrazi Conscription, and All is Dust. The Eldrazi Theme is further enhanced by the use of a mechanic nicknamed "Brood lineage" which produces 0/1 colorless Eldrazi Spawn creature tokens that can be sacrificed to add

One of the set's major themes is growth. Level up is a new mechanic which allows creatures to gain benefits permanently in exchange for a mana investment.[27][28] The set also contains creatures that grow using other means - Tuktuk the Explorer is a 1/1 Goblin legend that turns into a 5/5 Goblin Golem when sent to the graveyard, whilst Sphinx of Magosi grows using +1/+1 counters. Growth is also shown through temporary power/toughness benefits, as seen on creatures like Bloodthrone Vampire, Nirkana Revenant and Wildheart Invoker.

Another subtheme of the set is the heavy use of efficient Walls and other creatures with defender, including a wall (Overgrown Battlement) that benefits more based on the number of creatures with defender. These stop smaller creatures from attacking effectively, meaning that larger creatures, like Eldrazi and levelers, are needed to win games. The set also contains a number of "Casting Cost" matters cards, which scale an effect to another card in play, in the graveyard or revealed from hand.

Totem armor on the other hand is a mechanic on Auras which replaces the destruction of the enchanted permanent with the destruction of the aura. Rebound is another mechanic to get more use out of Instants and Sorceries.[29][30] When an Instant or Sorcery with Rebound is cast from hand, the card is exiled as it resolves and its controller may cast it again at the beginning of his or her next upkeep.

The set features Gideon Jura as a card and Sarkhan Vol made a return appearance as Sarkhan the Mad. Sarkhan the Mad is the first Planeswalker card to be printed without an ability that increases the number of loyalty counters on it. Meanwhile, Gideon does not have an ability colloquially referred to as an "Ultimate", a big effect costing a lot of loyalty counters, but instead can turn himself into a creature. Both cards also mark a change in templating as they use pronouns such as "him" and "himself" which were previously exclusively used to refer to players but not to cards or characters.

Many of the smaller Eldrazi Drones that are aligned with colored mana, as well as some spells, produce Eldrazi Spawn creature tokens. These 0/1 colorless creatures can be sacrificed to add one colorless mana—perfect for casting those enormous Eldrazi.[31]

Rise of the Eldrazi has one matched pair.

The following cards have been reprinted from previous sets and included in Rise of the Eldrazi:

Rise of the Eldrazi has 7 functional reprints: