Rogue is a creature type and class. Rogues are part of the party.

Although the Grand Creature Type Update retroactively installed Rogues into sets as far back as Arabian Nights, the first printed Rogues didn't show up until the adoption of the race/class model in Mirrodin in 2003. Neurok Spy and Moriok Scavenger represented the creative team's decision that Magic needed a type that would unify all bandits, vandals, and spies.[1]

Rogues are those who live by their wits, using stealth and cunning to make their way in life. Many rogues are notoriously tricky and amoral, as their clever minds and silver tongues give them an advantage over most others; a good rogue can steal the clothes right off an unwitting target's back. Many rogues are skilled with daggers, rapiers, and other light weapons.

Most rogues are blue or black, though rogues span all five colors. In the Grand Creature Type Update the subtypes Ali Baba (Ali Baba), Robber (Grave Robbers), Spy (Stromgald Spy) and Thief (Ingenious Thief) were incorporated into the Rogue class.[2]

The type Spy was later used in Unstable but is only existent in silver-bordered sets.

The prowl ability is associated exclusively with rogues.

Prowl is an alternative cost that appears on many rogue creature cards, and most tribal rogue cards, in Morningtide.[3] 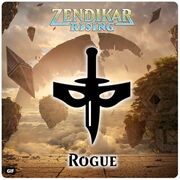