Saheeli Rai is a human planeswalker from the the plane of Kaladesh.[1][2] She is a brilliant inventor who specializes in creating lifelike animated constructs as beautiful as they are deadly.

Saheeli Rai is an especially tall woman with warm brown skin (noted to be taller than Kaya). She is lithe and graceful with curious eyes and a smiling mouth. She likes to wear long swirling dresses, decorated with shiny gold filigree, and her hair in swirls.[3]

Saheeli has a magical command over metal that she uses for the purpose of artifice and the creation of lifelike artifact constructs. She is even able to transmute metals from one into the other.[4] On Kaladesh, she is regarded as one of the brightest inventors of her age and she has many admirers and rivals. Enjoying competition, she's wholly supportive of the efforts of other inventors, happy to share advice, a kind word, or an encouraging smile. She thrills at the prospect of innovation, and basks in the creative spirit that surrounds her in Ghirapur.[5] Her dazzling intellect and mastery over metal make her a formidable adversary.

Saheeli has a bright, optimistic personality, and she loves facing off against other inventors in contests and tournaments.[6]

Saheeli is centered in blue and red mana. 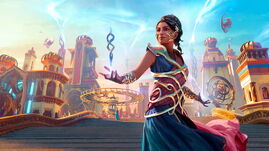 Saheeli Rai participated in the Inventors' Fair, keeping renegades away from it. When she learned of the work of her friend, the elf Rashmi and the vedalken Mitul, on an aether teleporter that seemed to move objects through the Blind Eternities, she refused to help her, fearing what could happen to Kaladesh if such an invention came into wide usage. After being confronted with a previous statement of hers, that innovation has no boundaries, she acquiesced to lend her aid nonetheless, having an audience with the Enlightened Keeper Padeem, one of the Consuls.[7]

After Tezzeret's coup and the confiscation of numerous inventions, and the abduction of some Fair participants, Saheeli joined forces with the Renegades and the newly arrived Gatewatch. She later learned that Tezzeret was hiding in the Aether Spire. Saheeli believed that he, together with Rashmi, was conducting experiments on the planar portal she had invented. Saheeli asked for help to break into the Spire. Liliana volunteered to accompany her.[8] While they didn't reach Tezzeret, the pair discovered that Rashmi had escaped and that her invention had been rebuilt and expanded to allow transport of inanimate objects to and from other planes. They brought her away to the Renegades.[9]

Saheeli later aided the Renegades in their attack on the Consulate's Spire. Working together with Pia Nalaar, she constructed the thopter Hope of Ghirapur to destroy Tezzeret's planar bridge, and together with Chandra, defended the Heart of Kiran from Consulate troops. After Dovin Baan's sabotage was discovered, she modified the thopter to carry Chandra and Gideon. When the pyromancer offered her a place at the side of the Gatewatch, Saheeli declined, stating that there would be much to do in the aftermath of the revolt on Kaladesh.[10]

When Huatli arrived in Ghirapur on her first planeswalk, she was quickly recognized for what she was by Saheeli. The two women shared their experiences, with Saheeli being eager to construct an artificial dinosaur after hearing about them from Huatli for the first time.[11] 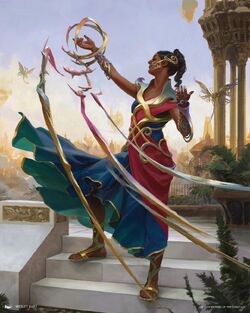 Saheeli and Huatli were lured to Ravnica by the Interplanar Beacon, and immediately became trapped there due to Bolas's use of the Immortal Sun. Alongside many other planeswalkers and Ravnicans, she fought against the Eternals of Bolas' Dreadhorde.[12]

During the invasion, the trapped planeswalkers got together with Ravnican leaders to strategize. At the meeting, Dack Fayden flirted with her, though he also considered stealing her jewelry.[13]

At Jace's recommendation, they decided to split up into teams to focus on specific tasks. Chandra, Saheeli, Lavinia, and Lazav were tasked with shutting off the Immortal Sun. Lazav disguised himself as Chandra in the fight against Dovin Baan, using illusions and an Izzet League flamethrower to replicate the effects of her pyromancy. This deception allowed the real Chandra to sneak into Baan's facility and disable the Immortal Sun, allowing many planeswalkers to leave Ravnica. Lazav subsequently defeated Baan, blinding him with throwing stars and causing him to planeswalk away.

Saheeli survived the battle. She appeared to be present during the Planewide Celebration that followed, but it turned out to be Lazav disguised as her, leaving Teyo to wonder what happened to the real Saheeli.

Saheeli participated in the memorial service for Gideon on Theros.[14]