Secret Lair: Ultimate Edition 2 is a product in the Secret Lair product range. Like its first iteration it is similar to a drop in the Secret Lair Drop Series, but with a different distribution model. It is available for purchase at WPN local game stores on May 7th, 2021 (due to production issues, the release date was moved up from the original date of March 5th).[2] 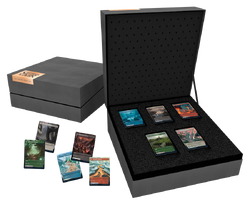 Ultimate Edition 2 is a collection of the ten Pathway Lands from Zendikar Rising and Kaldheim featuring art from ten of Magic's premier artists. The lands are "plane swapped": that is, the lands from Zendikar Rising have art set on Kaldheim, and the lands from Kaldheim have art set on Zendikar. They are packaged in a commemorative box that can be used for display. Due to issues surrounding procurement during the global pandemic, some of the commemorative boxes will be black and some will be dark gray. There is no difference between the two other than color.

Ultimate Edition 2 comes with a surprise bonus card, a stained-glass Blast Zone illustrated by Chris Ostrowski. It is numbered SLU #504.[3]