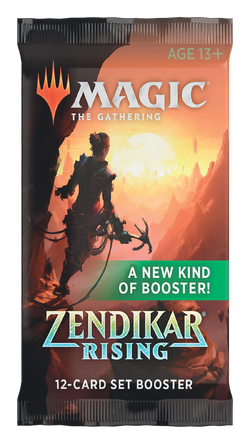 Magic Set Boosters are a product introduced for Zendikar Rising in 2020.[1][2] Set Boosters are targeted to players that are not interested in Draft or Limited, and sell for an about $1 higher price than Draft Boosters. Each pack comes with fourteen objects, twelve of which are Magic playing cards. The other pieces are an Art card and a Marketing card / Token.

Set boosters come in 30 packs to a booster box display rather than 36.

One of the big shifts in R&D's thinking in recent years is the idea of adapting their products to the audience rather than making the audience adapt to their products. After introducing Theme Boosters and Collector Booster, they realized that substantially more than half of all opened Draft Boosters are not used in Limited play (Sealed or Draft). They saw an opportunity to create yet another booster that was optimized to make opening boosters as fun as possible.

As they weren't beholden to any of the rules dictated by the needs of Draft (or Sealed), the Set Boosters didn't have to have exactly fifteen cards. They didn't have to have a set number of commons, uncommons, and rares or mythic rares. R&D was also free to experiment with putting cards in the booster that weren't game pieces. After much experimentation, they ended up with a pack that came with fourteen objects, twelve of which were Magic cards (in contrast with a Draft Booster, which comes with sixteen cards, fifteen of which are Magic cards).

The goal was to create a booster that had a path that you went through as you opened it. Rather than just one excitement point (the Rare of Mythic Rare), they designed the booster to have several excitement points. To do this, they've organized the booster into four sections that they call chapters (Welcome, Fireworks, Big Finish, and Epilogue), each with some number of cards ("slots"). Each slot has an element of possible surprise.

Set Boosters were introduced with Zendikar Rising in 2020.

For Strixhaven: School of Mages, every Set Booster contained a Mystical Archive card and a Lesson card in Slot 4 and 5 (+ 1 Wild card).[7]