Shadows over Innistrad returns to the gothic horror themed plane of Innistrad, emphasising a sense of mystery and creeping dread. The expansion symbol of the set is an upside down reflection of Avacyn's symbol. The set features the same tribal components as the Innistrad block with the five main tribes each being split over an allied color pair.[5] Spirits primarily in white and blue, Zombies in blue and black, Vampires in black and red, Werewolves in red and green, and Humans primarily in green and white. For the mechanics, R&D made a conscious decision to return more to Innistrad the set than Innistrad the block.[6] 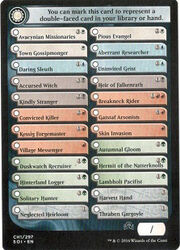 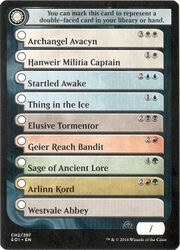 Innistrad is a world beset by terrible evils on all sides and betrayed by the hope it held most dear. Avacyn has finally returned, but what new evils have come with her? Madness is plaguing the inhabitants. Terror falls from the skies on blood-spattered wings and nameless horrors lurk in the shadows. Odd things are afoot: the forces that had protected the humans have been twisted into something dark and strange.[9] Jace Beleren of the Gatewatch investigates its dark mysteries. Meanwhile, Sorin is in search of the whereabouts of Nahiri.

The cards that represent the pivotal moments in the storyline are: Descend Upon the Sinful, Declaration in Stone, Epiphany at the Drownyard, Avacyn's Judgment, Anguished Unmaking [10]

In the spoiler season, people[11][12] noticed that the quotes from Tamiyo's Journal on the clue tokens differed for each language. This was eventually discovered to point to a code that produced a secret message. To find the message, write down the number of words in the flavor text of each of the six clue tokens. Then, look at the entry number in the flavor text of Tamiyo's Journal. Find the clue whose flavor text has a number of words equal to the first digit of the entry number. On that clue, find the word whose position in the flavor text corresponds to the second digit of the entry number. The third digit indicates where that word is positioned in the secret message. If you repeat this for each other language you get a word from each language and a position in the secret message (English and German have the same word in the same position). After you arrange the words in order, the secret message is: “Remember this they came as three”, referencing Ugin's insight and hinting at the presence of the surviving Eldrazi Emrakul.[11]

Part of the marketing campaign for Shadows over Innistrad is the publication of The Hanweir Chronicle, an Innistrad newspaper providing clues for the storyline.[14] On March 5–6, Wizards of the Coast hosted “escape rooms” in the form of Markov Manor, Thraben Cathedral and a Stitcher's Lab at various Grand Prix events around the world, while the online audience solved a variety of puzzles to unlock cards from the set.[15][16] 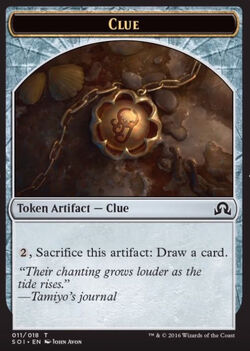 Clue artifact token with the symbol of the Westvale Cult. 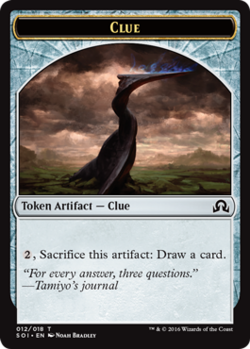 Themes from the set are tribal and graveyard matters.

The Madness mechanic returns from Torment, having last been seen in Time Spiral.[6][21] It allows you to pay an alternate cost to cast a spell if it is discarded. In the current set it is mostly associated with vampires.[22]

Transform returns from the Innistrad block. To transform means to turn over a double-faced card, changing the card face that is visible. The front or "day" side of the card has a regular card frame, a mana cost, and the sun symbol. The reverse or "night" side has the moon symbol and a slightly altered frame.

Shadows over Innistrad has seven cycles and a partial cycle: