The doppelgangers and shapeshifters of the isle of Vesuva are as mysterious as they are notorious. The magical doubles of visitors to the island have to tread cautiously as their doubles are murderously envious of the "originals."

The shapeshifters of Kaldheim live in the realm of Littjara. They wear intricately carved wooden masks to hide their true form.[1][2] They can take any form necessary to blend into their surroundings — including a shifting aurora form that enables them to move freely through the Cosmos — but they tend to prefer animal forms.

Green-aligned shapeshifters, known as Gladewalkers, prefer the forms of wild beasts over any humanoid identity. Bears are a favorite form, but any stag, lynx, bird, or squirrel spotted in the woodlands could be a Gladewalker in disguise. Covewalkers, the blue-aligned shapeshifters, are fascinated with water. They often take on the form of marine animals such as seals or dolphins. They also frequently adopt the identities of mariners, seafaring raiders, fishers, lighthouse keepers, and other humanoids who dwell on or near the waters.

Many believe that shapeshifters are formed from the same stuff as the Cosmos itself—pure shifting light and celestial energy. Whether or not that is their true nature, they can adopt a form similar to the auroras of the Cosmos in order to travel between realms. Curious and adaptable, they often spend only the few years of a brief childhood in Littjara before venturing out into the Cosmos to see and learn about other realms. Many shapeshifters spend almost their entire lives among other races, until at last they return to Littjara for the last years of their lives and end their existence submerged and subsumed into Pentafjord Lake. 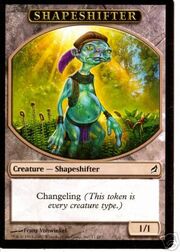 Changelings are relatively harmless, semi-sentient creatures native to Lorwyn.[3][4][5] They can be difficult to find, but they are quite distinctive when they are found, given their appearance. A changeling's standard appearance is that of a squat, greenish-blue humanoid with slightly scaly skin, large eyes, a translucent body, and frequently a forked tail. Their most noteworthy attribute is their involuntary ability to assume the shapes and characteristics of the creatures around them. This occurs no matter what type of creature is around, to their pleasure or annoyance, and sometimes it can result in some truly dramatic changes, ex. Changeling Titan. It is believed they reproduce in the secret cave of Velis Vel.

Found only in Shadowmoor, pucas are horse-headed shapeshifters whose moods swing wildly from mischief to malice.[6][7] They are amphibious and are particularly common near flooded swamps, mountain streams, and waterfalls. 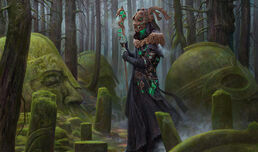