Shard of the Twelve Worlds 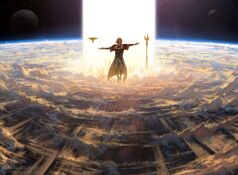 The Shard of the Twelve Worlds was an envelope containing twelve planes and separating them from the rest of the multiverse.

The only known planes confirmed to be in the Shard are Dominaria and Azoria. If the Nether Void is a plane, it is a third realm in this group. Jinuoe is a planet in Dominaria's solar system. The Shard came into being after the Sylex Blast, when Urza used the Sylex to protect Dominaria. Energy released from Dominaria formed the Shard, and crystallized twelve planes inside into the Dominarian Nexus, which stayed in this form even after the Shard itself fell. Many planeswalkers were trapped inside the Shard during the Ice Age. The passing of the rogue plane Shandalar allowed Faralyn, Leshrac and Tevesh Szat to escape from the Shard. Later, it also allowed Freyalise to cast the World Spell, ending the Ice Age and breaking the Shard. This allowed planeswalkers to roam free to and from Dominaria, but left it at the mercy of the machinations of Phyrexia. 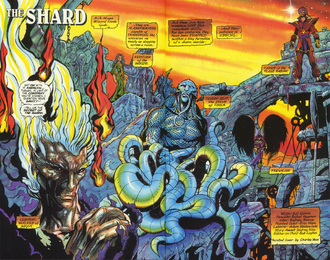 Planeswalkers arrested by the shard event.
Retrieved from "https://mtg.fandom.com/wiki/Shard_of_the_Twelve_Worlds?oldid=406420"
Category: