Sheoldred, known as the Whispering One is the Praetor of the Black Faction of the Phyrexian Invasion on Mirrodin.[1] 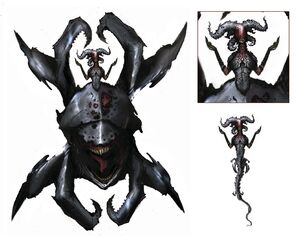 The black-aligned faction, led for the moment by Sheoldred, had one goal: enslave. Believers would serve. Unbelievers would be made to serve. All would bow to Phyrexia.

Sheoldred appears as a feminine humanoid torso emerging from a huge-mouthed, many-jointed fiend. Her movements are spiderlike in their grace, her limbs finding purchase among the mycosynth and metallic structures of the Core. Her body is covered with plates of oily, corroded metal. Her voice is a soft, grinding whisper, and she is kept informed at all times by a constant stream of informants, spies, and underlings.[2] Sheoldred's is able to separate her body into two pieces. Her relatively humanoid torso actually locks into an access inlet built into her monstrous lower half. Though few have seen it happen, Sheoldred is able to shed her large, predatory, more motile lower body and slither-skitter to a new home.

Besides her rank as a praetor, Sheoldred was part of a unique affiliation in Phyrexianised Mirrodin, known as the Seven Steel Thanes. The thanes appear to serve little more than as warlords of the Black faction, with no observable utility for the rest of Phyrexia and actually, each thane intends to take over the plane. Using knowledge and secrecy to advance herself, Sheoldred intended to become omnipotent, but being in direct competition with equally ruthless thanes like Geth it was equally possible that she would fail.