He is one of the few players to have achieved multiple Pro Tour wins; alongside teammates Tomoharu Saito and Tomohiro Kaji, he won Pro Tour Charleston in 2006; and in 2016, he won Pro Tour Kaladesh. His other significant accomplishments include the 2006 Player of the Year title, winning the 2017 World Magic Cup, and 22 Grand Prix top eights, with one win. In 2015, he was voted into the Hall of Fame. In December 2018, it was announced that Yasooka would be one of the 32 players joining the upcoming 2019 Magic Pro League. Because he finished in the Top 20, he could continue in the 2020 Season. 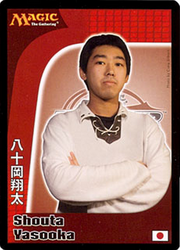