Sifa Grent was a human planeswalker from Grixis and the archenemy of Dack Fayden. She was the main antagonist of the comic series by IDW Publishing.

Sifa ascended when the demon Malfegor tried to steal Sifa's spark for himself so he could finally escape the tiny world of Grixis.

In the past, Sifa Grent visited Echoir and had been in contact with the resident Titan.

On Fiora, Sifa slaughtered everyone in Drakeston in search of Dack Fayden, hoping to tap into his great potential for her own means.

Using the Ancient Fang, Dack tracked Sifa to the plane of Innistrad where she had allied herself with a Baron of the Falkenrath clan. Sifa assaulted the village that had allied itself with Dack. However, she missed Dack who had gone to her own manor in search of her. Dack managed to return, but barely in time. He rallied the forces of the village, but had to make the tough choice to let Sifa flee rather than see the village destroyed at her hands. 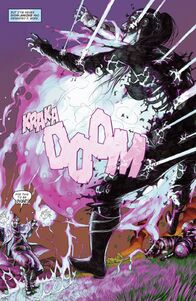 Using his psychometry on one of the messages, Dack figured out Sifa's plan on Ravnica. She was plotting to drain the power from all of Vitu-Ghazi with the same spell she had used to consume the life from Drakeston. With his motley crew of misfits and thieves, Dack rushed to the City Tree, arriving just in time to confront her and her forces. An enormous battle was waged in the boughs of the tree and Sifa had Dack on the ropes, but she forgot to protect herself from a sword. One of Dack's colleagues managed to stab her from behind, wounding Sifa horribly at the cost of his own life. Dack loomed over Sifa as she bled, trying to suck the life from the tree to restore her own health, but Dack would not allow it and cut loose with his most powerful spell, bringing vengeance upon the death mage at last.