Skemfar is one of the ten realms of the plane of Kaldheim.

Skemfar is a shadowy realm where towering trees block any view of the sky and vast peat bogs hide the remnants of ancient battles among the gods. Seven massive trees hold the losers of those battles forever bound, and their ancient halls now provide homes for their distant descendants, the elves. Tunnels bored by the great Cosmos Serpent wind through the ground. The air is redolent with the smells of life and decay, and the weight of uncounted ages hangs heavy. At first blush, Skemfar looks like a vast expanse of unspoiled wilderness, untouched by any sentient hand since the beginning of time. In truth, elvish settlements are dotted across the landscape. Some are hidden underground or carved into gnarled roots, and others are graceful buildings seamlessly grown into the living branches overhead. A few of these settlements—where the wood elves and shadow elves live together, reunited under their new king—include both branch-lifted and root-sunk dwellings, reflecting the elves' intertwined destinies. The largest elf settlement is Jormund, an ancient city built when the elves were gods. Its architecture is ornate and ceremonial, bearing little resemblance to the more recent constructions of either race of elves. Magic pervades the place, limning the branches with faerie glow in the perpetual twilight under the trees' high branches. At the heart of the city is Harthhall, the newly built home of the king of the elves.[1] 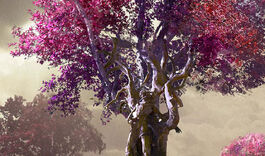 Seven towering trees scattered across Skemfar's wide forests are said to be prisons where the Skoti imprisoned the surviving leaders of the Einir, setting them as a warning of what happens to those who challenge their divine authority. The entombed Einir are now one with the trees that bind them, and the elves revere the trees as if they were their ancient leaders. Each of the trees has unique magical properties based on the god imprisoned within: one produces fruit that can heal any illness and close any wound, another produces wood that can't be cut or broken (except when the god inside decides to give a branch to a worthy supplicant). Harald, king of the elves, claims to have received a vision of a united elf dynasty when he ate the fruit of a Jaspera tree and slept beneath its boughs.[1]

The elves revere Koma, the Cosmos Serpent. In ancient times, they say, the serpent roamed freely and drank deeply from the ancient arcane energy of Skemfar. He left a vast network of tunnels in his wake, and both wood and shadow elves consider these passageways to be sacred spaces. The elves tend the tunnels faithfully, believing that the Cosmos Serpent will one day use them to return to Skemfar, for the gods of the current age, the Skoti, have forbade him from entering any of the realms. The elves are almost as angry about this as they are about the Skoti defeating the Einir, the elves' divine ancestors.[1]